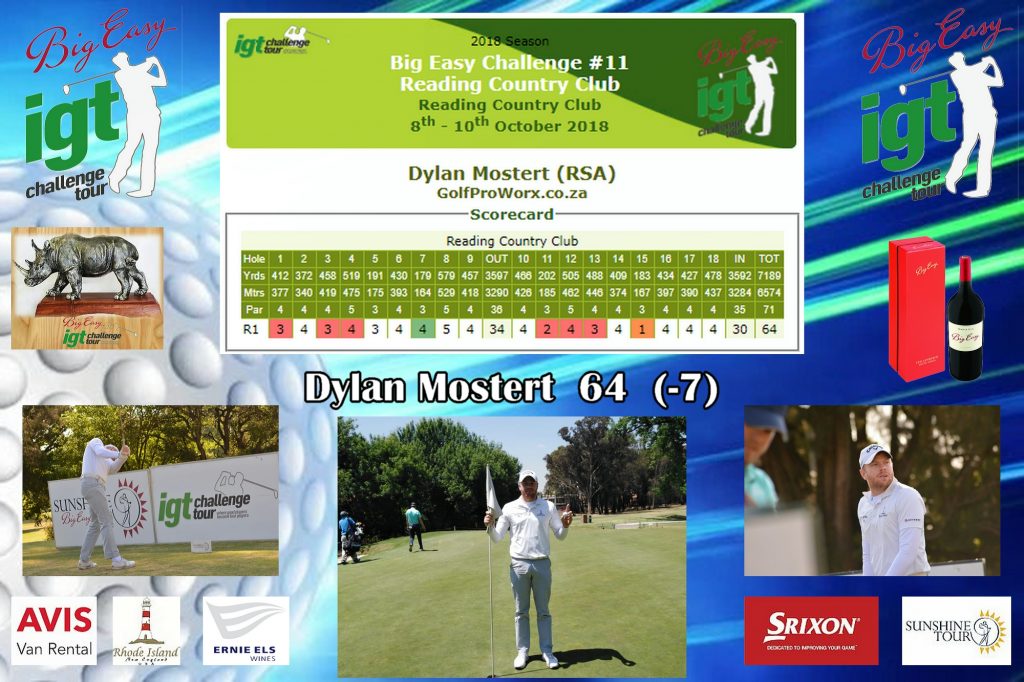 Mostert makes his move at Reading

ALBERTON, 8 October 2018 – Road to Sunshine Tour leader Dylan Mostert rediscovered his form to move into the first round lead at the Big Easy IGT Challenge Tour #11 in Alberton on Monday.
On a day when 27 players broke par at Reading Golf Club, the 20-year-old State Mines golfer set the benchmark high, making light work of the breezy conditions to fire a seven-under-par 64 that featured six birdies, a lone bogey and his third career ace at the par-3 15th.
Mostert opened up a two shot lead over Albert Venter and Kyle Barker and he finished three strokes clear Sunshine Tour player Matthew Spacey and rookie Hayden Griffiths.
A group of four players – Bryce Myburgh, Marco de Beer, Matt Bright and Quintin Crause – finished a further stroke back.
Mostert, who won the series opener and the third event, has maintained the number spot in rankings despite a string of sub-standard finishes in July and August.
The Ekurhuleni rookie showed all his class when he fired his best round of the season to make an excellent start in the hunt for a third title. He was left ruing a bogey at the par-3 seventh, but was happy overall with his opening effort.
“I put myself in a good position early on to get one of the 10 Sunshine Tour cards on offer at the end of the series, but then somewhere in July I lost my swing,” said the 20-year-old Mostert.
“I was striking the ball really badly and I put in a lot of long hours to get back on track with my coach Neil Cheetham. It started to pay off in September, when I had two sub-par rounds in the Big Easy IGT at Services to tie for 10th.
“Last week I played the Witbank Open on the IGT Challenge Tour and shot three rounds of 72 and I felt that I was close to my best. I haven’t played at Reading since my junior golf days, but I felt good over the driver in the practice round and my swing was there today.”
Mostert drained the 35-foot downhill putt at the first for birdie to set the tone for his round.
“I birdied the third and fourth holes, but I misjudged the wind at the seventh,” he said. “I took the wrong club, overshot the green and couldn’t up-and-down. I didn’t make a bad swing, though, so it didn’t upset me too much.”
Mostert judged the crosswind at the par-3 11th perfectly, though, He aimed an 8-iron straight at the flag, the ball pitched next to the hole, released to 12 foot and he boxed the putt to kick-start a run of three birdies on the bounce.
“I hit a good drive at 12, gap-wedge in and two-putted,” he said. “At 13, my tee shot landed just right off the fairway. I hit my second to 15 foot and holed the putt.
“At 15, I had 150 metres to the pin, so I hit a soft, smooth wedge and watched it drop in the hole. It didn’t bounce or hit the flag; just dropped straight in. That was pretty cool.”
His clubhouse target went unmatched and he looks forward to leading the field in round two.
“I kept on hitting it where I wanted to and I holed some vital putts today, so hopefully I can pick up where I left off tomorrow,” he said. “I’m happy now that I know what’s going on with my swing and I can tell when it goes wrong. I felt really confident over my driver and it felt great to hit it down the barrel again. It’s nice to start the tournament well and get off to the right foot.”
Venter mixed five birdies and an eagle at the par-5 fourth with a pair of bogeys, while Barker fired a flawless six-under 66. Griffiths had eagles at eight and 12, but gave shots back with a double bogey at 13 and a bogey at 16 and Spacey racked up half-a-dozen birdies for his 67.