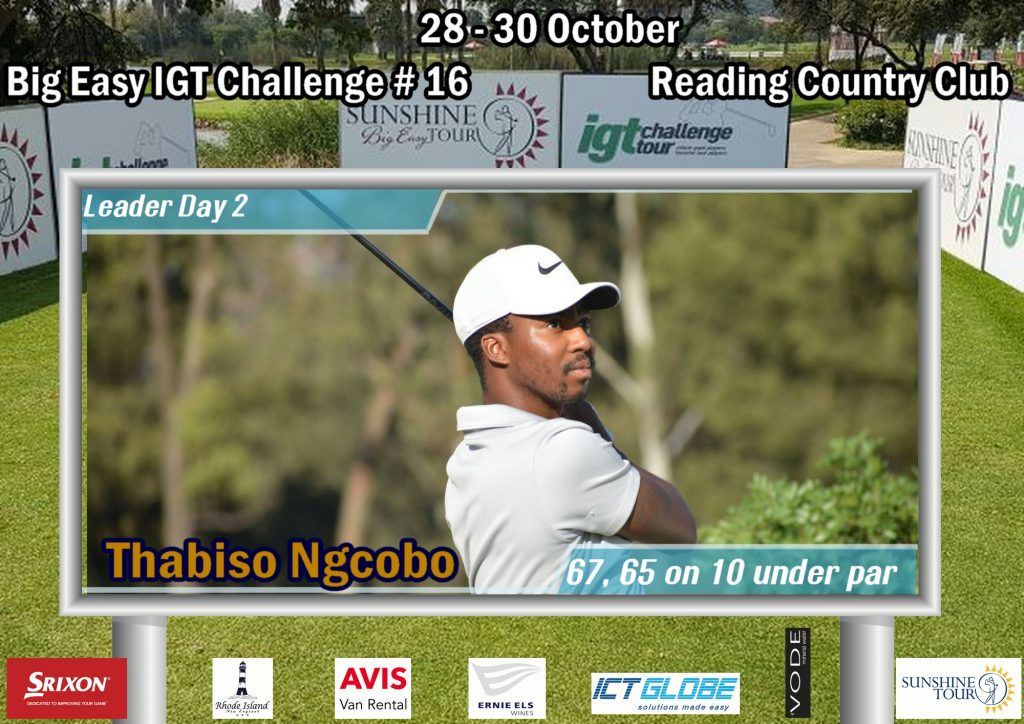 ALBERTON, 29 October 2019 – Thabiso Ngcobo will look to lift his first pro title when he heads into the final round of the 16th Big Easy IGT Challenge Tour event in Alberton with a three-shot lead on Wednesday.

Spectators at Reading Country Club were treated to a truly stunning round of golf by the Pretoria golfer as he posted a six-under-par 65 to move to 10-under.

The Centurion golfer is perfectly placed to claim a maiden win, which would boost him from his current fifth place ranking in the Road to Sunshine Tour Order of Merit to third.

“It would definitely take me another step closer to a Sunshine Tour card, because the top three ranked players at the end of the season will earn playing privileges for next year,” he said. “I can’t think about it, though. I need to keep a clear head for the final round. I’m really happy with the way I’m playing this week and I’ll just give it my best shot tomorrow. I would be happy to shoot another solid round and if it happens, great.”

Even though it could have been one shot better, Ngcobo did not rue a bogey finish.

“I can’t cry over spilt milk,” said the 25-year-old Phelan Golf Academy player. “That was as solid as I have played all year and apart from the bogey at 18, it could not have been any better.

“I have felt that I was underperforming a lot this season and it took me a long time to figure out that I was getting in my own way. Today I stayed really patient and trusted my game. I committed to my shots and that built my confidence.

“This golf course is a great test. You have to concentrate, and stay patient. And putt well, too. The greens are quite grainy and you have to put a bit of pace on the putts. Today I executed really well with the flat-stick.”

Joint overnight leader Clayton Mansfield returned a round of 69 to finish alone in second on three-under, while a 69 earned Gideon van der Vyver a share of third alongside Basil Wright, who claimed the low round honours with a seven-under-par 64.

Jason Froneman, who held a share of the overnight lead on five-under, is five shots adrift after a level-par round. He shares fifth with Marthin Scheepers (69), Jack Duthie (65), Jason Smith (69) and Jason Viljoen (68).

Ngcobo opened with a 67 to start the second round one off the pace and racked up a trio of birdies over the first nine holes to burst into the lead.

“It was nice to get off to a birdie start. I hit 3-wood off the tee and kept it low and hit a knock-down gap-wedge into the wind to tap-in distance,” he said. “My eagle putt on the fourth just pulled up short and I tapped in for birdie and on the sixth, my playing partner had a similar putt from 20 feet and gave me a good line and pace for my third birdie. The first nine holes were really solid. No drama. I never put myself in tough positions where I needed to save myself.”

“On the last hole, the tees were at the back and I couldn’t hit my usual draw, but I faded it too much and finished in the trees,” he said. “I punched out for the bunker, because my bunker play has been solid and I was hoping to up-and-down. But the shot went too far past and I missed the 8-footer for par. It was right to left and I had the line, but I didn’t give it enough pace.”

After completing a Corporate Communications degree at Varsity College Pretoria in 2017, Ngcobo began competing on the IGT Challenge Tour. He missed out on a card at the Vusi Ngubeni Q-School, but the Centurion golfer believes it was for the best.

“My game was definitely not at a level where I could have competed on the Sunshine Tour,” he said.

“Playing the IGT Challenge and Big Easy IGT Challenge Tours full-time this season has helped to take my game to a higher level. Both tours are hugely competitive and teaches you how to compete and keep a cool head under pressure. In retrospect it was the best thing that happened to me.”