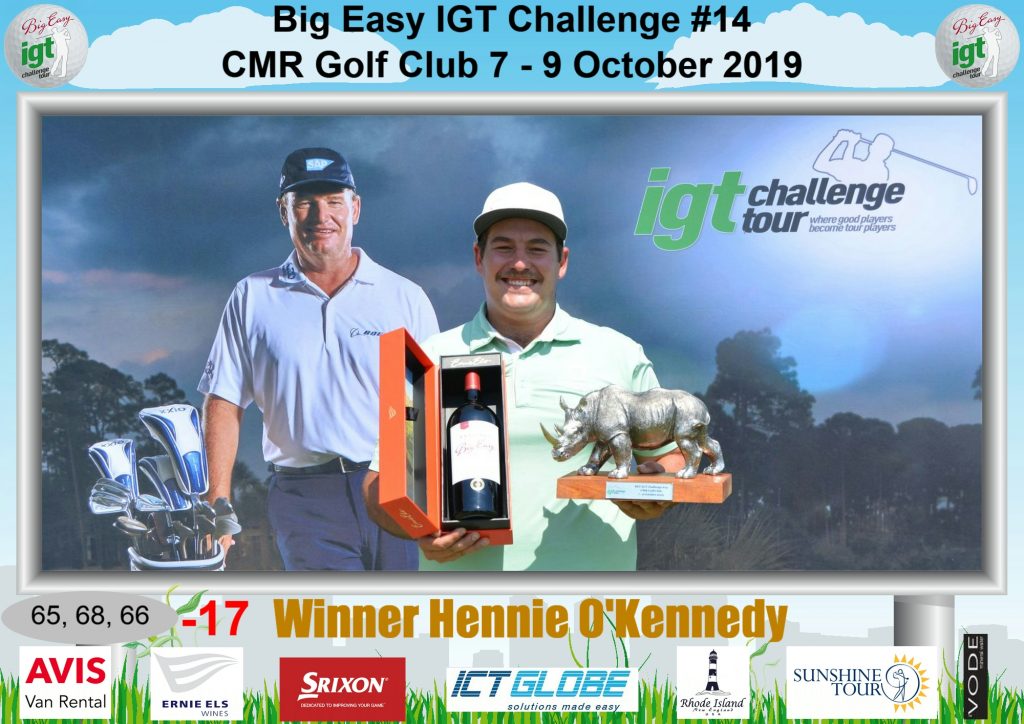 O’Kennedy picked the perfect event to announce himself as coverage of the final day’s action at CMR Golf Club was streamed live on Facebook for the very first time. The big-hitting Boland rookie stayed cool under pressure and fired a six-under-par 66 in windy conditions to celebrate a three-shot victory on 17-under 194.

“It is pretty special to be the first guy on the Big Easy IGT Challenge Tour to have my win broadcast live, but it was crazy,” said the Stellenbosch resident.

“My phone was ringing off the hook and the messages were just flooding in. I am shocked at how many people watched the streaming and called to congratulate me. It’s has definitely been a very special day.”

O’Kennedy and Groenewald began the day three shots back from Quintin Crause, who surged into pole position on 14-under with a second round 63.

O’Kennedy let one slip with a three-putt bogey on 11, but rallied with back-to-back birdies on 12 and 13 and he pulled three-shots clear on 15-under when Groenewald bogeyed 12.

“I hit a decent 2-iron on 12, but the tee shot stayed out and finished in the left rough,” he said. “I had a decent lie and I was 145 metres out with the wind from the front with trees in the way. The pin was tucked on the left and I pulled off a magic shot that landed three feet from the flag. That birdie was the kick I needed and I hit a great trap-shot on 13 to keep the momentum going.”

Groenewald got within two shots twice with birdies on 15 and 17, but O’Kennedy kept his cool in the blustery conditions to stave off the challenge.

“The 16th is a driveable par four and I landed my tee shot six feet right of the pin. The eagle putt slipped by, but I tapped in for birdie to three clear again,” O’Kennedy said. “The adrenaline was pumping on the last tee and I hit a huge drive. I had 150 metres flag and I aimed a wedge to the middle of the green. I lagged it close and tapped-in birdie for the win.”

The victory moved O’Kennedy to eighth in the Race to Sunshine Tour standings.

“Cracking the top six to gain my playing privileges for the Sunshine Tour next season has been the main goal this season, and I’m just two spots away,” said the rookie. It’s within my grasp now.”

At 23, O’Kennedy is slighter older than many of the rookies campaigning on the golf development circuit which provides a platform for young professionals to prepare for the big stage. He completed the three-year PGA of SA course at Stellenbosch Golf Club through Swingfit and took an extra year to compete on the GolfRSA national amateur circuit before joining the pro ranks.

“It definitely prepared me better for life in the paid ranks,’ OKennedy said.

“The transition was pretty smooth and my game has been solid all season. The more times you can put yourself into a position to win titles, the more you get used to it, but you need a strong mind-set. That’s what separates the winners from the herd.

“I’ve been working on strengthening my mental game and I talk quite a lot with Johnny Louw, who has taught me a lot about staying in the moment and believing in myself.  He is a former policeman and drug addict who became a Christian motivational speaker. I can honestly say that today was all about my mind-set and my self-believe that I can win.”

Allister de Kock (68) tied for second with Groenewald (69) and his R7 230 pay-day shot the Gary Player School of 2019 member to the number one spot in the Transformation Order of Merit. The top three ranked golfers on this money list at the end of the season will also gain playing privileges for the Sunshine Tour next season.

“The Sunshine Tour chose the Big Easy IGT Challenge Tour to test this now initiative and the live streaming went off like a dream,” he said.

“Congratulations to the Sunshine Tour, EFX Productions and our commentators Alan Michelle and Matthew Carvell on successful launching this ground-breaking technology. It was fantastic to see viewers from all over South Africa and abroad tune in to follow the action. Live streaming will allow us build a much bigger audience for golf in South Africa and to draw international golfers to our shores.”