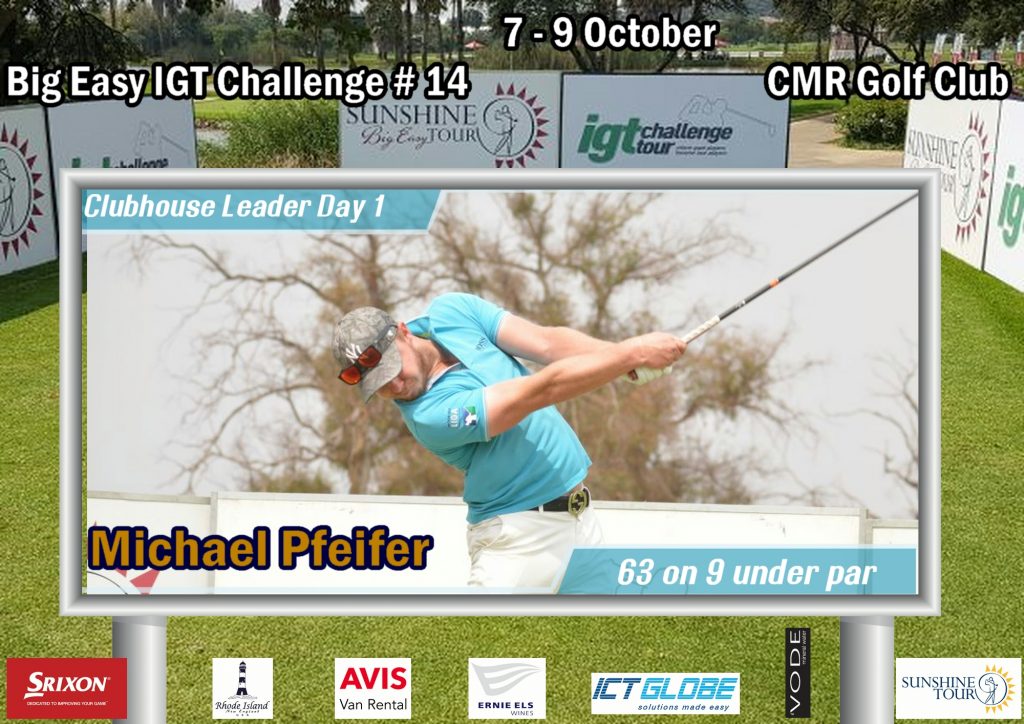 JOHANNESBURG, 2 October 2019 – Michael Pfeifer produced his lowest round of the season to take the first round lead in the 14th Big Easy IGT Challenge Tour event on Monday.

The German-born South African made the most of favourable scoring conditions and birdied nearly half the holes at CMR Golf Club on his way to a nine-under-par 63.

He leads by two shots from Boland rookie Hennie O’Kennedy and Jeremy Sharpe and will start the second round four shots clear of Kyle Murphy and Quintin Crause in joint fourth on six-under.

Pfeifer broke into the top 30 of the Road to Sunshine Tour rankings with a tie for 25th in the 13th event of the season at Parkview Golf Club last week and he is determined to retain his spot in the standings until the season wraps up in November.

Forty-eight players in the 75-strong playing field broke par on the first day and with the cut currently at two-under Pfeifer knows he needs to keep the form going.

“The biggest goal this season is to secure playing privileges on the Sunshine Tour for next season,” he said. “Including this week that gives me four events, but realistically I am too far back to have a chance of finishing in the top six to get an automatic exemption.

“So I need to build enough points to make the top 30 before the Tour Championship to guarantee myself a start at the final stage of Q-School. That gives me a much better chance of making it to the Sunshine Tour. The standard this year is incredibly high, so I will need two more rounds like this to bank the most possible points.”

Pfeifer built his lead with four birdies on his outward loop. After making the turn without dropping a shot, he offset his only bogey of the round with another quartet of birdies and rounded off a superb day at the office with an eagle finish on the par five 18th.

“I didn’t exactly get off to a flying start,” Pfeifer said. “I hit my tee shot in the water at the first hole, and had to negotiate a drop, a tree and a car path to save par.

“I did birdie the other two par fives (fourth and fifth holes) on the front nine and that got the momentum going. At seven, I hit a good second shot to three metres and made the birdie putt. It was the first putt of significant distance I holed and that got me fired up.”

A trio of birdies from the ninth moved Pfeifer into the lead on six under par.

“I hit it stiff on the ninth and made good up-and-downs for birdies on 10 and 11, but then I three-putted the 12th,” he said. “I hit the downhill putt much too hard and it sped three metres past the hole. The return putt lipped out and I holed it on the third try.

“I drove the green on 16 and my eagle putt from six metres out just shaved the hole, but I tapped in for birdie. I boxed an eight footer for birdie on 17 and then I went for the eagle finish.

“My tee shot wasn’t great and ended in the semi-rough. I had 190 metres flag, so I hit a hard 7-iron and left myself short left, facing a five metre eagle putt. I had the perfect pace and direction on the putt and we watched the ball disappear down the hole.

“It wasn’t the easiest of days out there. It was nice and warm, but there was a gusting wind that changed direction and speed. It made club selection on a couple of holes quite tricky. I drove it well and kept it in play a lot. I gave myself many looks at birdie and made quite a few. I hit some shots really close, to tap-in distance and when I needed to make an up-and-down, I did it well. Now I just need more of the same for the next two rounds.”