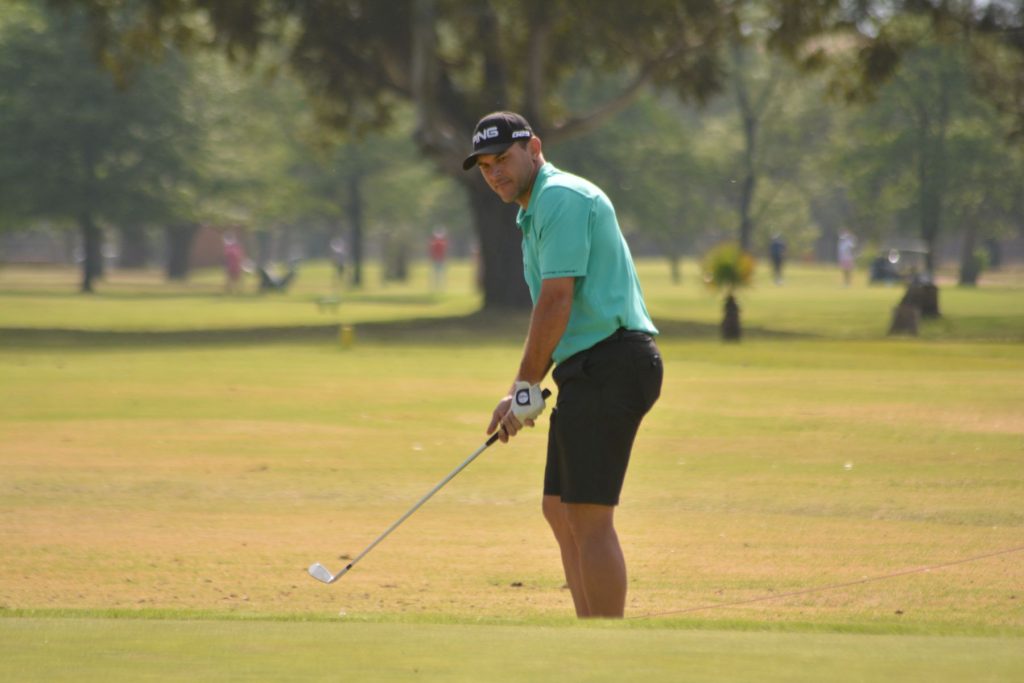 WITBANK, 29 September 2018 – He might be a social golfer these days, but big-hitting Brandon Pieters hasn’t lost the competitive drive that saw him bank four victories on the Sunshine Tour.

“I guess that proves this old dog still has some fight left,” joked Pieters.

The Benoni Lake golfer was on top of the world after landing a share of the second round lead in the IGT Witbank Open and partnering Hennie Kruger to victory in the Pro-Am Competition with a brilliant 13-under 59 on Saturday.

Pieters fired a five-under-par 67, which included a run of four birdies on the front nine, to finish at the top of the pile alongside Michael Pfeifer from Fancourt on five-under 139.

“I was really surprised at how well I played out there,” said the 42-year-old Benoni Lake golfer.

“About two years ago I started working for Nepic, the largest individually owned Internet Service Provider in Gauteng. At first it was just a part-time gig to help them market themselves, but the job has evolved. These days my golf is limited to the Thursday School at Glendower.

Marius Wizen is the director of golf here at Witbank Golf Club and an old mate of mine. He called me when he learned the IGT Challenge Tour were coming to town and invited me to come.

“My expectations were low, but I think I played so well because I was having fun. I love this place. The Highveld Classic was always one of the most popular stops on the Sunshine Tour. We were all pretty cut up when Bearing Man decided to move it to Gauteng.”

Pieters, who won the renamed Highveld Classic (the BMG Classic) at Glendower in 2010, would love to leave Witbank on Sunday with another IGT trophy.

“I’m stoked that I’m in a mix. I drove it well, the short game was sweet and the putter was on song. And I holed a great trap shot at the eighth for birdie that kept the buzz going. Lots of fairways and greens, so I think I’m in with a shout.

“And I see Jeff Inglis is also right up there. He has also reached the 40-mark, so maybe us old dogs will teach the whipper-snappers a thing or two on Sunday.”

Inglis from England carded successive rounds of 70 to finish at four-under to take second in the Pro-Am Competition with his amateur partner from event sponsor Root Butchery. The Englishman will start the final round one off the pace in joint third with first round leaders Andrew Burmester and Ruan Groenewald, who both returned even-par 72s.

Randpark’s Kyle Barker also registered a round of 70 to sit alone in sixth on three-under.

Tokkie van den Berg posted a six-under 66 to take the low round honour and a share of seventh with fellow Pretoria golfer Hendrikus Stoop on one-under.