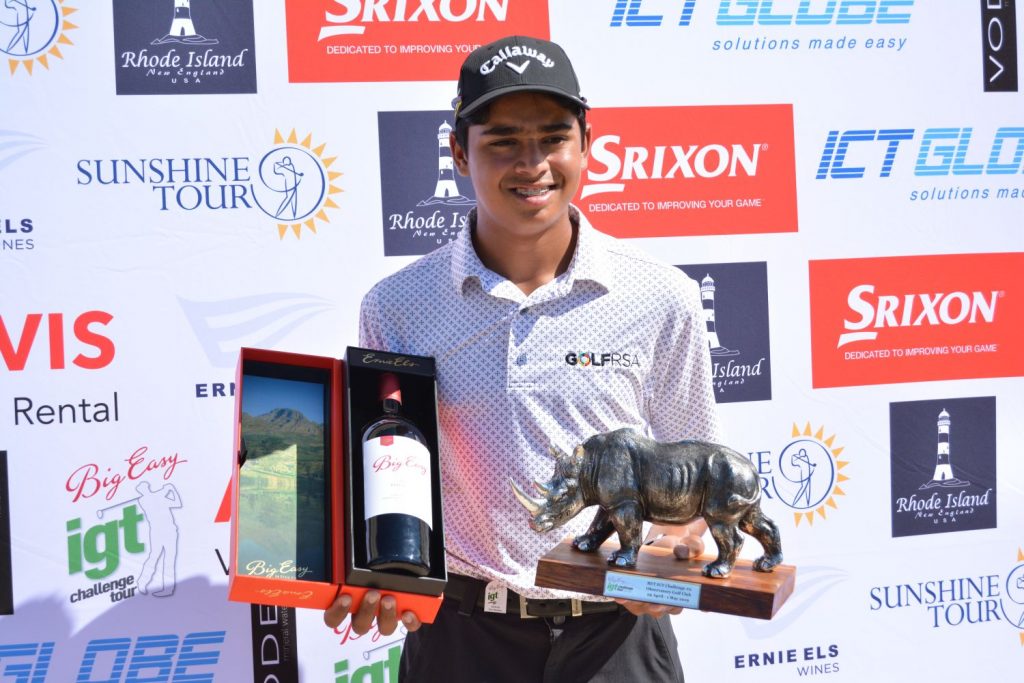 JOHANNESBURG, 1 May 2019 – Yurav Premlall hit the global headlines last year as the youngest amateur to qualify for and make the cut in the South African Open Championship at Randpark Golf Club and, on Wednesday, the Glendower junior made more golfing history when he became the youngest amateur winner on the Big Easy IGT Challenge Tour.

At 15 years, 10 months and 14 days, the GolfRSA National Squad member was composure and confidence personified as he upstaged a field of professionals at Observatory Golf Club with a masterful display to close out a two-shot victory on 12 under.

“It feels so good. It’s hard to find the words. I’m so delighted this victory,” he gushed. “It’s just what I came here to do this week and to deliver on the job feels so good.”

Premlall is the second GolfRSA National Squad player to win on the local golf development circuits this season. In February, another Ekurhuleni junior Casey Jarvis became the youngest IGT Challenge Tour winner at 15 years, seven months and 22 days with his win at State Mines.

Premlall, Jarvis and Christiaan Burke, who finished second on 10 under, will be heading to Ireland with four more members of the squad at the end of May as part of the GolfRSA National Squad annual tour.

The troupe will play the East of Ireland Championship at County Louth Golf Club and the St Andrews Links Championship in Scotland before they travel back to Ireland to for the Amateur Championship.

“This win is a great boost before the GolfRSA National Squad Tour,” said Premlall, who attends BSI Sport Academy at Huddle Park.

“I was really happy with my top four finish in my first Big Easy IGT Challenge Tour event at Centurion two weeks ago and I learned a lot from that tournament. This week the course was incredibly tight and the set-up was tough; it really tested us.

“Christiaan and I both really enjoyed it. We are grateful to GolfRSA for giving us another invitation to play this week to gain more experience and get some more world amateur golf ranking points.”

The teenager began the final round three shots back of joint leaders Coert Groenewald and Gideon van der Vyfer, two former Sunshine Tour campaigners trying to play their way back onto the main circuit via the Big Easy IGT Challenge Tour series.

A birdie start and further gains at six, seven and nine saw Premlall take the lead on 10-under.

Burke – five off the pace at the start of the final day – also raced into contention with an eagle-birdie combination at second and third holes and moved within a shot of Premlall with birdies at seven and nine.

Van der Vyfer dropped out of the race, but Groenewald offset four bogeys with an equal number of birdies to share second with the Free State amateur.

Premlall started the back nine with a bogey 10 and dropped another shot at 13, but showing the determination that has taken him to sixth in the SAGA Open Amateur Rankings, he responded with a birdie at par three 15th.

“I hit my tee shot left on 10 onto the next fairway and tried to play a miracle shot,” he said. “I nearly pulled it off, but it caught the bank and rolled down, leaving me with an impossible chip and I couldn’t up-and-down to save par.

“At 13, I hit another wayward tee shot right. The ball hit a bank and bounced even further right and I misjudged the distance and overshot the green. I was behind a tree, so I took my punishment and moved on. At 15, I hit a full sand-wedge and it pitched 20 feet behind the flag and spun back to six foot. I snuck the putt in the right side of the hole.

“There has been lots of tournaments where I made bogey and then I bounced back with a birdie, and this was just one of those moments. That birdie on 15 got me back in the fight. It just confirmed to me that I am playing well, and I just need to keep on doing what I’m doing.”

Burke also let one slip at 13, but rallied with birdies at 15 and 16. He secured the clubhouse lead on 10-under with pars at the two closing holes for a final round 66.

Then Premlall holed out at the par four 17th to spoil Burke’s party.

“I’ve been struggling with that tee shot all week, so I tried to hit driver and hit it out right onto another fairway,” he said. “I had 120 metres to the pin; a perfect gap-wedge. The green is elevated and I didn’t know where if finished, but I knew it was good when the guys starting clapping. I kind of went mad when they signalled us that it went in.

“I took a couple of deep breaths on the 18th tee box and told myself to cut it down the left. I pulled it off and hit a little gap-wedge to four feet and snaked in the putt for 66 and the win.”

Groenewald had back-to-back bogeys at 10 and 11 and doubled the par four 13th, but the seasoned campaigner also bounced back with an eagle at the par five 14th and a birdie pair at 15 and 16. A late bogey at 17 saw the Houghton golfer sign for 73 to finish in third on eight-under.