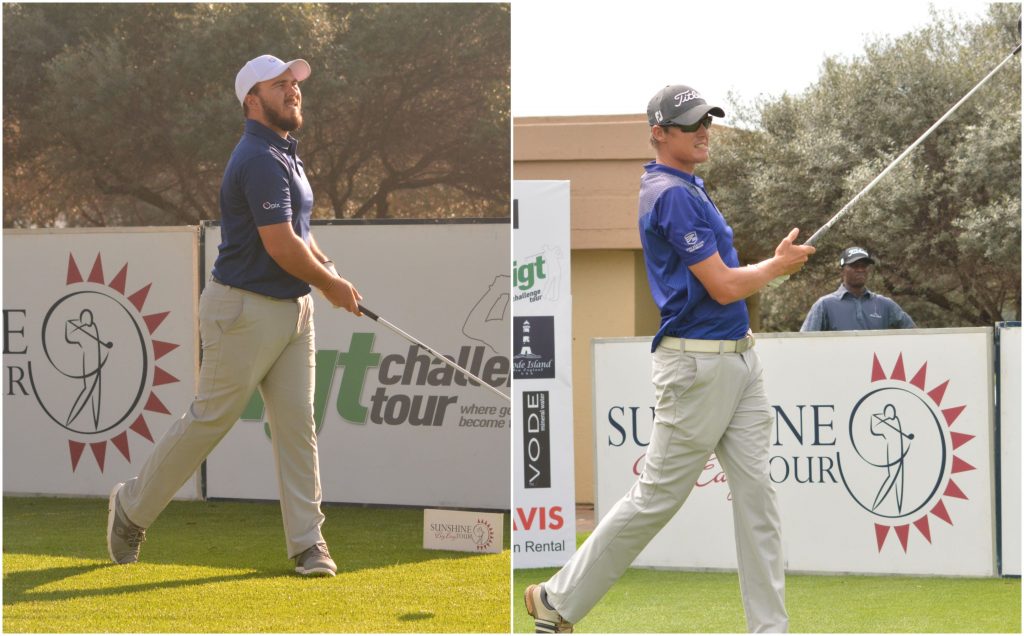 PRETORIA, 15 April 2019 – Eric Nel and Maritz Wessels share the first round lead in the Big Easy IGT Challenge Tour #1 after the Pretoria duo carded matching six under par rounds of 66 at Centurion Country Club on Monday.

Local favourite Nel moved past a group of four bunched at the top of the leaderboard on five under with three birdies on the bounce from the 13th to the 15th holes. He was joined at the summit by Wessels, who reached six under courtesy of two great wedge shots at 14 and 16.

Roberto Lupini, Jason Rossiter and former GolfRSA National Squad stablemates Malcolm Mitchell and Clayton Mansfield are one off the pace in joint third.

Wessels, a former IGT Challenge Tour graduate, enjoyed three competitive seasons on the Sunshine Tour from 2013 to 2015 before he lost his card. He hopes to play his way back onto the main circuit via the Big Easy IGT Challenge Tour.

“This circuit is a mulligan for guys like myself and the youngsters who aren’t quite ready for the bigger leagues yet,” said the 31-year-old Wessels, who coaches at Colban Driving Range in Pretoria.

“Qualifying School is tough and there are no second chances. One bad round and you’re coming back next year. This year I missed by just two shots. At least I got Big Easy IGT status. Sixteen tournaments to finish in the top 10 that gets a direct pass to the Sunshine Tour. I did it in 2014 when I won the Big Easy Order of Merit, so that’s the goal this season.”

The Waverley resident got off to a fast start with a two-putt birdie at the par five first further gains at five, six and eight took him around the turn in four under.

“I played really nicely to start with and I was fairly consistent, but I definitely left a couple out there on the back nine,” said Wessels. “I hit it close at five and eight and holed a 15-footer from the back of the green at six.

“Got it to five under with a birdie at 10, but gave it back at 11 when I couldn’t up-and-down from the greenside bunker. At 14 I wedged it to a foot and at 16, I hit another really good wedge in to 10 feet and boxed the putt.

“I hit my approaches pretty close, which makes life easier, and I holed the short ones. I could have been more under par, which is always a bit frustrating, but you can’t complain at six under.

“I’m not at the top of my game just yet, but it’s early in the season. I’m consistent and I feel I’m playing nicely. I had plenty of looks all day and I feel I can score even better.”

Nel also missed out at Q-School in March and has the same goal as his co-leader.

“I had a nice little run on the back nine where I birdied three in a row,” said the 21-year-old Centurion resident. “I hit it left on 13 and 14, but I got on the green and drained 20 foot putts on both holes for birdie. At 15, I laid up to 100 metres, pitched it to three feet and boxed the putt.

“I didn’t have a great ball striking day, but I scrambled incredibly well. I only hit two fairways all day, but I only missed one green and I putted really well. Hopefully I can find the fairways on Tuesday and post a really low one.”

Thabiso Ngcobo, who finished third overall in the Gary Player School Rankings last season, opened with a four-under-par 68 to sit two strokes off the pace.