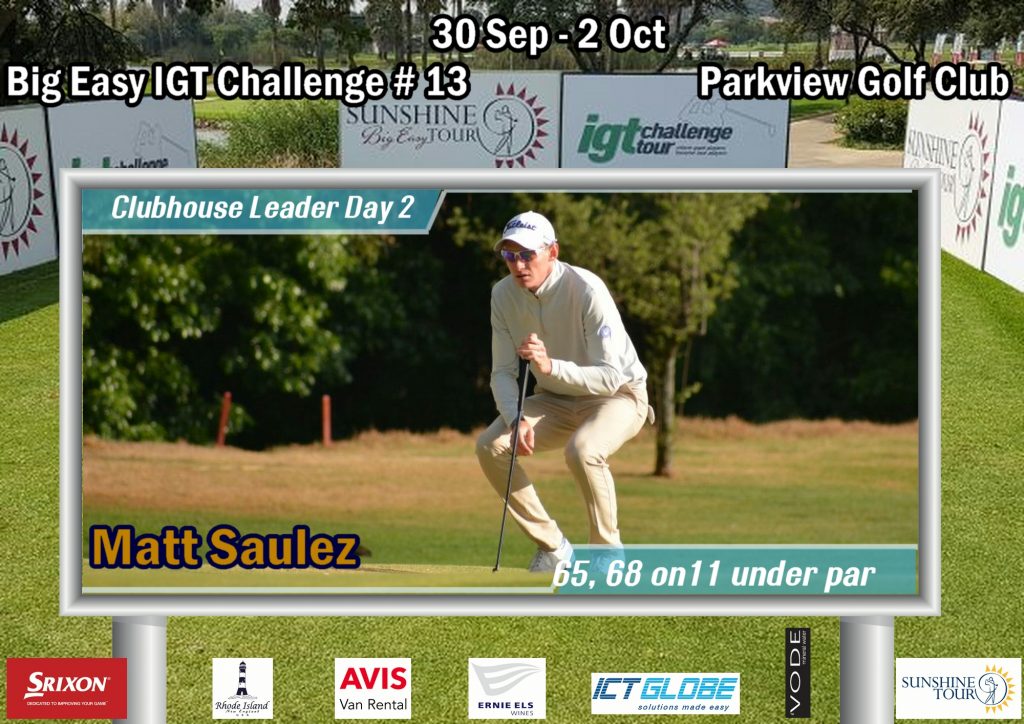 JOHANNESBURG, 1 October 2019 – Matt Saulez retained pole position at Parkview Golf Club on moving day to leave himself in a great position to lift his first professional in the 13th event on the Big Easy IGT Challenge Tour .

The Durban rookie shared the first round lead with seasoned campaigner Thabang Simon on seven-under and maintained his momentum on Tuesday, reeling in five birdies for a four-under-par 68.

With 18 holes left to play and a three shot cushion on 11-under, Saulez is solely focussed on a good score on the final day and not thinking about the success which could follow.

“I trying not to think about it,” said the 20-year-old Durban Country Club golfer.

“I’m nearly back to kind of form that took me to second in the GolfRSA Open Amateur Rankings. All I care about at this point is another good performance. Winning would mean that all the hard graft was worth it, but it would be a bonus more than anything else. I really want to prove to myself I can put three sub-par rounds together. That’s the main focus right now.”

Saulez got off to a birdie start at the par five opening hole, notched three more birdies going out and overturned a lone bogey on the ninth with one more birdie coming home.

“The wind was tough to navigate today,” Saulez said. “It wasn’t too strong, blowing around 15 km per hour, but it was swirling a lot, which made club selection slightly tricky.

“I had another really good ball striking day and kept the ball in play for most of the round, which really kept the momentum going. And I was pleased to make a birdie on the first to start, because it set a positive tone for the day.”

Saulez wedged it to 15 feet on the par-three fifth and holed the birdie putt. A solid chip and putt on the sixth took him three under for the round.

“On the eighth, I pushed a 2-iron into the trees right, but I punched out with a seven-iron just short of the green and chipped in for birdie,” he said. “I pushed my tee shot on the ninth, too, and this time paid with a bogey, but I wedged it close on 12 for birdie to get it back to four-under.

“The rest of the round was solid, nothing fancy. Five-under today in much tougher conditions was a good score. I’ll take that any day.”

Saulez will play alongside fellow KwaZulu-Natal rookie Byron Coetzee and Simon in the final group, with Malcolm Mitchell, Matthew Spacey and Adriel Poonan chasing in the penultimate group.

Soweto’s Simon offset three bogeys for an even-par 72 and the Gary Player School of 2019 member finished third on his own on seven-under, while Coetzee from Cotsworld Downs mixed five birdies with a trio of bogeys for a 70 to take second on eight-under.

A further shot back is Poonan and Spacey, who also posted 70s to tie for fourth on six-under with reigning Race to Sunshine Tour Order of Merit leader Mitchell. The Kloof golfer carded 69, but got within two shots of Spacey before a quartet of bogeys derailed his round.

“The field will be coming for me in the final round, but “I’ll just keep doing what I’m doing and if I play well enough, I’ll finish in front,” Saulez said.

“Someone could run hot and put a great round together and that’s fine by me. I’ve got a target that I want to get to and that’s all I will be focusing on. If I’m able to do that it will be reward enough.”

Stuart Smith from Botswana fired the low round of the day, a six-under 66 that boosted him to joint 17th on two-under, while Boland rookie Karl Osche matched Saulez’s 68 to make the cut – set at even-par – on the number.