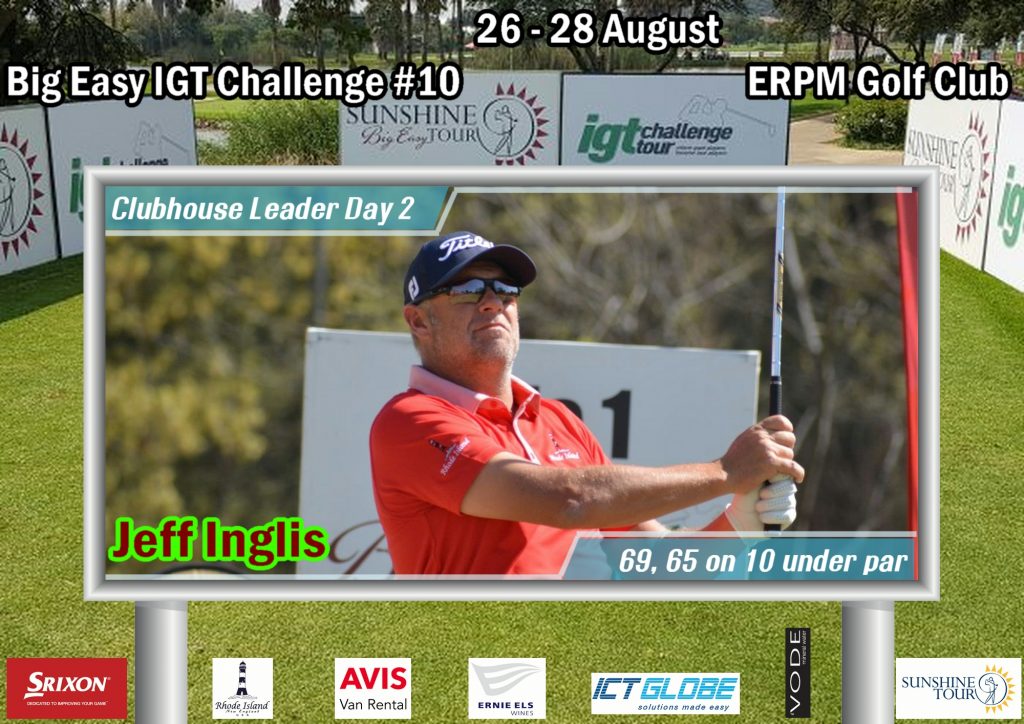 In-form De Smidt carded a five-under-par 67 to move to 10-under, but Inglis matched his clubhouse target with a flawless 65 that featured five birdies and an eagle.

As a thrilling day of action drew to a close in Boksburg, the seasoned campaigners finished one shot clear of Ruan Korb and Peetie van der Merwe. While Korb blistered the 66 strokes, Van der Merwe took the low round of the day with a blistering eight-under 64 to grab a share of third.

Coert Groenewald managed to stay in touch with a 71 and the overnight leader will start the final round three shots off the pace. Clinton Grobler (70), Albert Venter (71) and reigning Road to Sunshine Tour leader Malcolm Mitchell (72) are a further shot adrift in joint seventh.

Having lost their playing privileges on the Sunshine Tour, De Smidt and Inglis are hoping to avoid a return trip to Qualifying School by taking advantage of the reward on offer on the Big Easy IGT Challenge Tour.

“At the end of the season, the top six players on the Road to Sunshine Tour ranking will automatically gain playing privileges for the 2020/2021 season. Although I’ve had some starts this year and I’m in a strong position on the Sunshine Tour Order of Merit to regain my card, I’m covering my bets,” said De Smidt. “It’s a chance to pass go and it helps to build confidence, playing competitive golf every week.”

The 29-year-old Krugersdorp golfer has enjoyed a great run of form since May.

De Smidt banked cheques in four of his last five starts on the Sunshine Tour and rose to 35th in the rankings. He followed a home victory on the IGT Challenge Tour at the start of August with a runner-up finish in the ninth event on the Big Easy IGT Challenge Tour a fortnight ago.

“I played some good golf at Wingate Park, but I hit a few bad shots and missed a few putts in the final round,” he said. “I haven’t played at ERPM in more than 10 years, so I didn’t remember much about the course and the first nine holes on day one was a bit scrappy. I went five-under on my back nine, though and today I had a great ball striking round.”

The four-time Sunshine Tour winner fired three birdies on the trot from the second, and followed with three more gains on the back nine. The only blemish on his card was a bogey at the par three seventh.

“I hit a good bunker shot close at the second and solid second shot to eight feet on the third. Just a regulation birdie at the par five (fourth), and I holed a few more birdie putts down the back. I was hitting it nice and straight off the tee, which you need to do at this course.

“I am reading and holding the lines well on the greens, but more than a few putts didn’t drop and I also didn’t hit them close enough. I’m very comfortable being in the lead, and it’s nice to be in this position again. I just need to get off to a fast start and get the putter going early on.”

Inglis – coming off back-to-back top 10s that has lifted him to 12th in the rankings – was three off the pace at the start of the day after an opening 69.

The Orkney golfer turned four under after an eagle at the par five second and birdies at four and eight and boxed three more birdie putts on the way home.

“After a solid par start, I hit a 5-iron to 30 feet on the second and holed a long putt to just get me off to the perfect start,” said the 41-year-old. “I hit a wedge into the fourth and two-putted for birdie and another birdie took me through the turn on four-under.

“The strategy for the back nine was to limit the mistakes and try to finish bogey-free. I almost holed a hook 9-iron on the 12th and had a two-putt birdie on 13, and I held it together nicely. I drove it left on 17, but I hit a great punch-shot on the green and two-putted for the last birdie.

“I had a nice, solid day off the tee. Some half decent putting and the rest of the game was there to back it up. Looking forward to the final round and a good tussle with Ruan.”