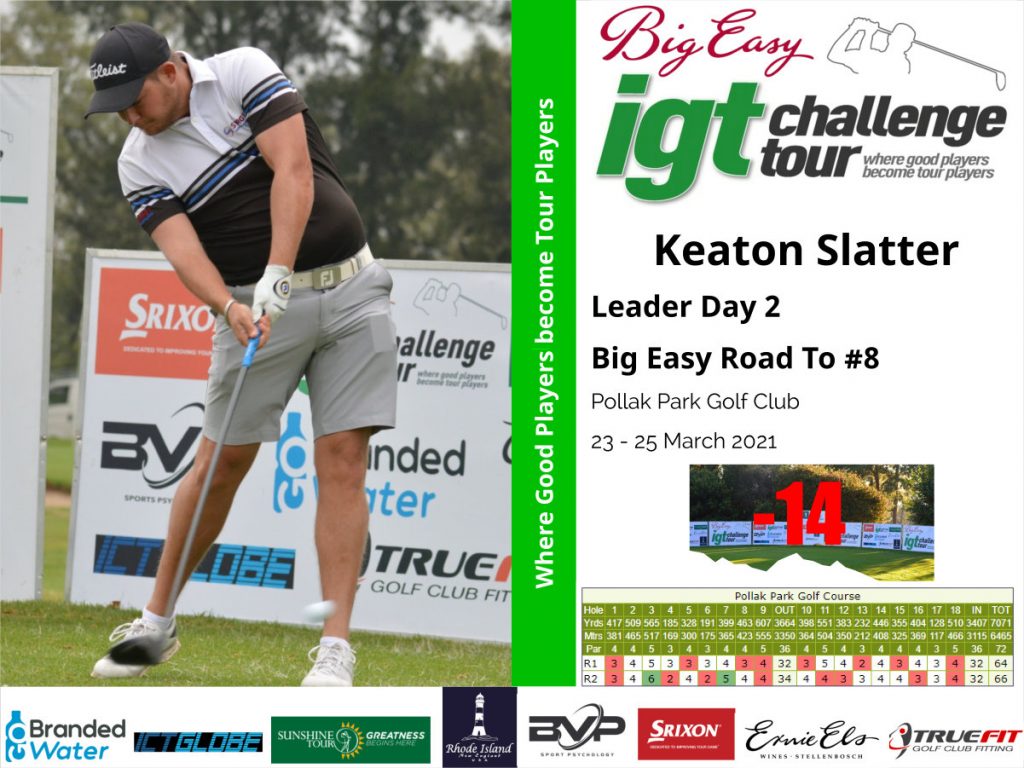 SPRINGS, March 24 – Keaton Slatter will sleep on the lead for the second day in succession after his round two six-under-par 66 catapulted him to a 14-under-par total and five shots clear of Matt Saulez in the Big Easy Tour Road To #8 at Pollak Park Golf Club.

Slatter’s front nine proved to be eventful, with his birdie on the first hole canceled out by a drop on the par-five third. He recovered swiftly thereafter, birdieing the par-three fourth and sixth holes before surrendering another shot on seven. Again, Slatter showed calmness and birdied the ninth to turn in 34.

“My drop on three was from a bad tee shot, “Slatter revealed, “ I worked my way up the green and eventually missed a four-footer for par. The drop on seven was also from a driver that ended up in the bunker and I was not able to save from there.

“The back nine was great, although the weather made it tough. I was just focussing on getting the ball in play and giving myself the best opportunities for birdies, and it felt like with the weather conditions, I was able to do that very well.”

Slatter has every reason to feel great about his effort on the homeward nine. His flawless 32 there was characterised by birdies on 11 and 12, and then another on the 16th before sealing the round with one more birdie on the par-five 18th.

“It’s a great feeling to be ahead because it’s not a position I have been in before,” Slatter said, “I know it’s cliché but if I keep doing what I’m doing and try not to think about the results, then things will fall into place. I feel confident around this track; it’s just about getting the ball on the fairways. It’s not the longest course so you have a lot of wedge opportunities from the fairways.”

Slatter is looking for his maiden Big Easy Tour title and will feel confident of his chances in the East Rand. Saulez, at nine-under this week, has already won on Tour this season and despite the margin by which he trails, he will fancy a come-from-behind challenge in the final round.

Back-to-back rounds of 68 have amateur Ryan Van Velzen tied for third with Dylan Kok and Ricky Hendler on eight-under for the tournament.