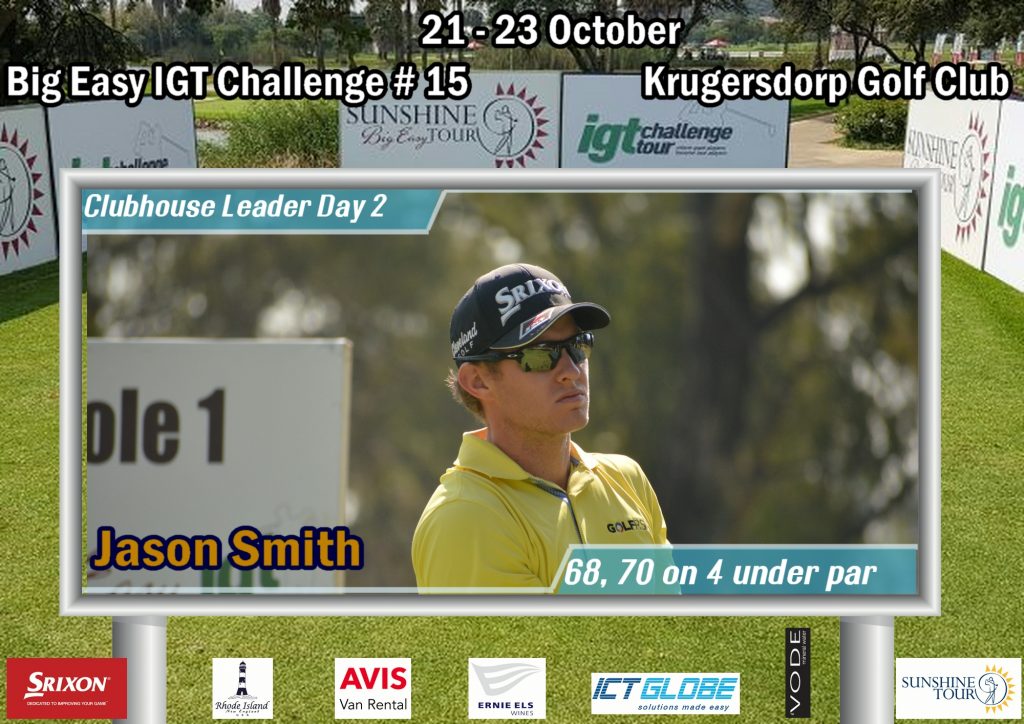 KRUGERSDORP, 22 October 2019 – Jason Smith will take a one-shot lead into the final round of the 14th event on the Big Easy IGT Challenge Tour, but the Pretoria golfer will have a sizable chasing pack breathing down his neck as he seeks to become the series’ first three-time winner.

Smith had to stay patient on another windy day at Krugersdorp Golf Club.

He mixed 14 pars with two bogeys and a pair of birdies in an even-par round to lead by one shot on four-under from Leon Vorster, Eric Nel and Desne van den Bergh.

A further eight players within three shots of his lead.

“The wind was tough to read today,” said Smith, who won the fifth event and 12th events and sits in second place on the Road to Sunshine Tour rankings. “The wind gusting and kept changing direction. You finally pick a club to trust and then the wind doesn’t do what it’s supposed to do. It was a bit of a battle.

“I had to scramble for a few more pars than yesterday and I also didn’t hit enough approach shots close to the pins to make birdies. It was a grind; one of those rounds that if you can get it one or two under par or limit the damage, you walk away happy.

“I’m relatively okay with the round today, but I will need to take advantage of the par fives in the final round. There are three on the front nine and if you birdie those, it sets you up nicely and gives you some good momentum to take into the back nine.”

The trio in joint second all returned rounds of two-under-par 70.

Nel from Centurion and seasoned Vaal de Grace golfer Van den Bergh – already a winner this season – had a trio of bogeys, while Orkney rookie Vorster racked up four birdies and an eagle three to join the three-way tie on three-under.

“The course set-up wasn’t as tough as on day one, but the swirling, gusting wind made club selection very difficult,” said 22-year-old Vorster.

“I hit gap-wedge to three feet on the sixth. I drove my tee shot right into the trees and hit my second over the green, but chipped in for eagle. That birdie-eagle combo definitely kept me in contention,”

Local favourite Calvin Caldeira also posted 70 to in a tie for fifth on two-under with Byron Coetzee, who went the deepest on the day with a six-under-par 66.

The 19-year-old Kloof golfer birdied all the par fives, and fired a trio of birdies down the home stretch to clinch the low round honours.

“The highlight of the round was definitely the birdie on the stroke one, par four 15th,” Coetzee said.

“I pushed my driver right into the trees. I went for the green over the trees, but caught the top of a tree and I was fortunate to find the fairway. I hit a brilliant gap-wedge into the wind straight at the pin from 125 metres and it pitched two feet short of the flag, rolled past and spun back straight into the hole.

“That really got my confidence back up. I drove it 10 metres short of the green on 17, chipped it close and boxed for birdie. On the last hole, I went with a 4-iron and had about 120 metres flag. I hit another brilliant sand-wedge to a foot behind the hole and tapped in for birdie. I was really happy with that score. I’m two behind, but I have given myself a chance.”

Meanwhile it was a day to forget for Zabastian de Jager.

The Klerkdorp rookie was two strokes off the lead at the start of the round, but held the outright lead on seven-under through 12 holes before four bogeys over the next five holes and a double bogey for a 73 finish dropped him to on one-under and joint seventh.