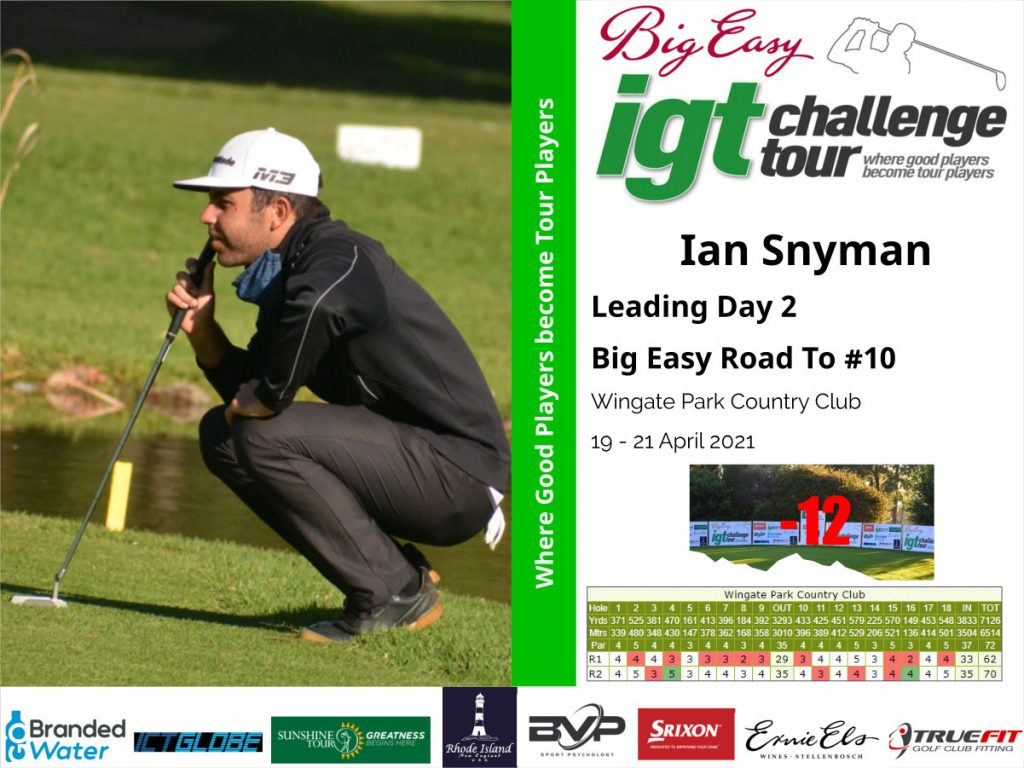 PRETORIA, April 20 – Overnight leader in the Big Easy Tour Road To #10, Ian Snyman, was able to hold on to his lead despite tougher weather conditions and thanks to a second-round 70 which took his total to 12-under and a shot clear of Matthew Rushton at Wingate Park Country Club.

Coming into the second round after a confidence-boosting 10-under 62 on day one, Snyman knew it was always going to be difficult to replicate that form on Tuesday.

“Today was a lot windier than yesterday, I must say,” Snyman noted after his round. “Today was a little bit different; not as many birdies but a very solid round of golf. I made two drops today; no big numbers and I have fewer birdie chances today than I did yesterday.

“Yesterday I converted a couple of long putts but today I was not able to get a lot of them in the hole. But I think I played solidly and I hit a lot of fairways and greens, but the putts today did not drop as they did on the first day.”

Snyman’s second-round front nine score consisted of a solitary birdie on the third hole and a bogey on the next hole, with pars dominating what was a steady, if not outright perfect, front set. Coming home, Snyman birdied the 11th, 13th and 15th before making another drop on 16. His total of 70 proved enough to push him a single shot clear of Rushton whose eventful round yielded a 65 to catapult him to solo second at 11-under for the week.

Coming through with the second-lowest score of the round after Rushon’s 65, Gerhard Pepler fired in a stunning 66 to take the third spot on the leaderboard at 10-under and two shots adrift.

“Tomorrow is going to be an interesting one,” said Snyman who will be paired with both Rushton and Pepler in the final round of this 54-hole event. “I know Matty well and I think he played really well this week so it’s going to be fun. I’m not even thinking about a win or something like that. I will just stick to my plan and not try anything fancy.”

Harry Konig continues to play himself into contention on this circuit and his round-two 70 to back up his opening 67 helped him to a tournament total of seven-under and solo fourth ahead of the final round. Jason Froneman is six-under this week and occupies the fifth spot on the leaderboard while Christiaan Burke shares sixth with Carlo Heunis.