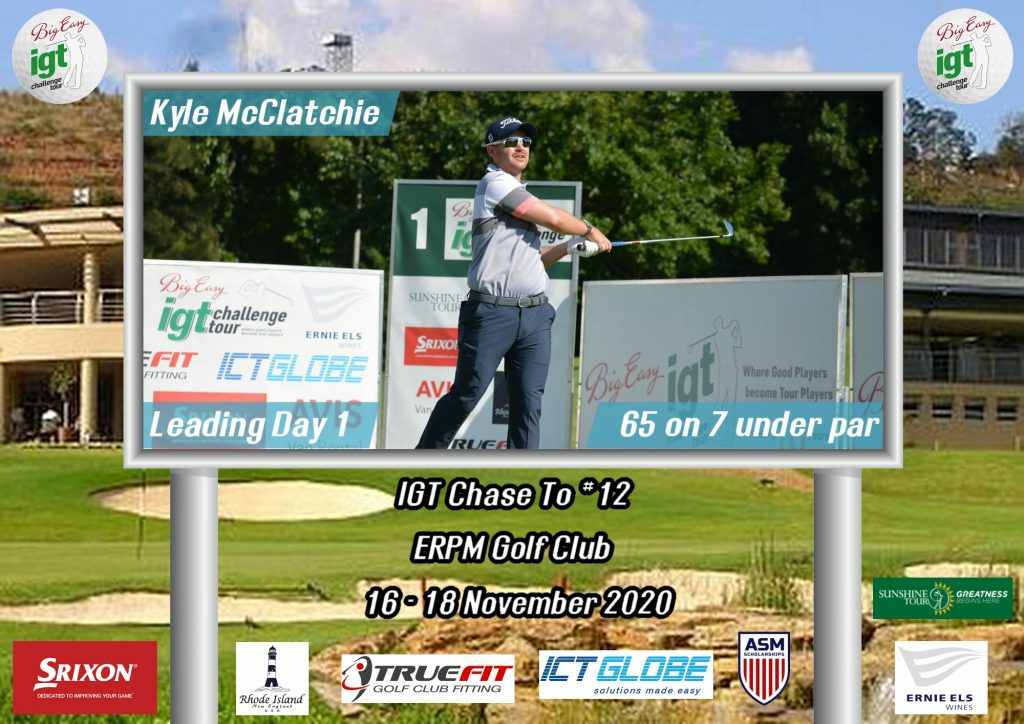 Solid McClatchie in control in Boksburg

BOKSBURG, November 16 – Kyle McClatchie birdied three of the four par-five holes at ERPM Golf Club on his way to a seven-under-par 65 opening round of the IGT Tour Chase to #12 on Monday.

That score was enough to hand him a two-stroke lead in what was another strong start to a tournament by the 23-year-old who plays out of Serengeti Estates in eKurhuleni.

“I took advantage of the par-fives,” McClatchie said on Monday. “I thought I scored the par-fives pretty well. They are not very long around here but you just need to get the ball in play. I did that well today.”

He got off to an inspired start, birdieing his first three holes – which included the par-five second – and followed those up with two pars before his only bogey of the day came. This was on the par-four sixth hole. He closed off the front nine with a birdie on nine to turn in 33.

“I got off to a good start today, I’m generally a slow starter,” he said after his round. “Three birdies in a row was the start I was looking for. It was nice to make birdies upfront and it proved to be a good day at the office.”

His back nine was just as strong, characterised by back-to-back birdies on 10 and 11 before birdieing both the par-five holes – the 13th and 17th – to seal a near-perfect 65 on day one.

“I had to stay patient out there,” McClatchie said. “There are some tricky holes and some that were kind of easier. I hit the ball really well and I putted very nicely. I missed a couple of tee shots, though, but those are things to improve on in the week.

Having already claimed his breakthrough win as a pro when he won the Sunshine Big Easy Tour Road To #2 at State Mines Country Club last month, McClatchie will hope his solid display on Monday carries through the rest of the week to earn what could be his second title in two months.

He has a two-shot lead over Frits Orren and Victor Lange who tie second at five-under. Tied for fourth are recent winner Franklin Manchest, Jason Froneman, Ian Snyman and amateur Warwick Purchase at three-under.

Leon Vorster and Marcel Steyn Scholtz make up the leading 10 players and they are two-under-par after round one.