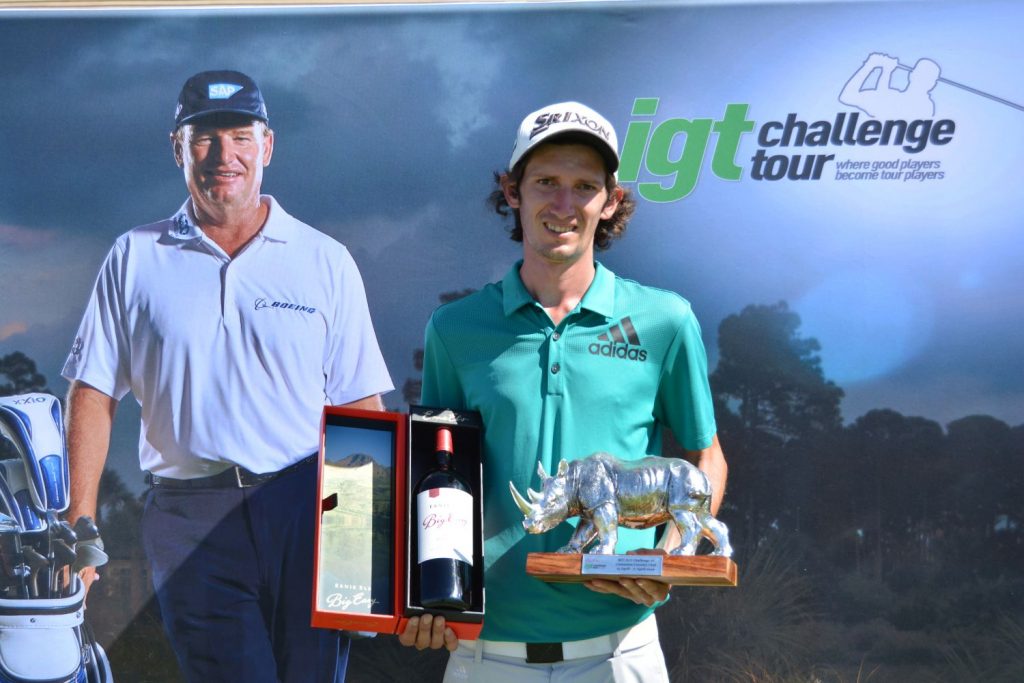 The Dainfern golfer prevailed in a fascinating back nine battle with the Sunshine Tour rookie at Centurion Country Club to claim his fourth professional title with a final round 69 and a winning total of 16 under par.

Spacey had started the week as one of the tournament favourites after winning the first event of the IGT Challenge Tour season a fortnight ago at Wingate Park Country Park.

He lived up to that billing when he came from behind with a brilliant 10-under-par 62 to catapult to the top of the second round leaderboard.

Spacey led by three shots from Mansfield, local favourite Eric Nel and former Sunshine Tour winner Ruan de Smidt, another favoured player at the start of the week, and stayed well ahead of the field when he birdied all three par fives on the front nine.

Mansfield stayed in touch, though, with a trio of birdies around the turn.

“I knew I would have to play well to win because if someone got hot, the lead could evaporate quickly,” said 28-year-old Spacey. “My goal at the start of the day was to try and birdie all the par fives, and to keep it simple: fairways and greens. Clay was really solid off the tee and he was putting well and I knew he could get hot over the last nine holes.

“I stuck to my game plan going down the back. I made a good up-and-down for birdie at the par five 12th, and hit a good drive down the 13th fairway, a lob-wedge from 104 metres to four feet and holed the birdie putt to go five shots clear.

“Clay missed a few birdie chances, but I gave him an opening when I my tee shot at 15 hit a tree and ended up out of bounds right. I had to reload and my second tee shot drifted left, just off the fairway. I had to lay up and didn’t make the bogey putt.”

The double bogey left Mansfield just three shots adrift, but Spacey managed his game over the last three holes with a calm maturity to close out the win.

“My competitive experience on the IGT Challenge Tour and the Sunshine Tour definitely came into play over the last three holes,” said Spacey. “I stayed patient and played percentage golf. There is a time to get aggressive and this wasn’t that time.

“I tapped in for par 17 and made a great up-and-down from the bunker to save par at 17. At the last hole, I played it safe and went for the green in two. I had 35 feet to the hole and he was close, so I lagged it to six foot and made the par putt after Clay made birdie.”

Spacey was over the moon to collect the first cheque of the season.

“It feels really good. Any time you can win a professional golf tournament, no matter where, it’s a big win. I’m very pleased with the win, because to get a Sunshine Tour card at the end of the season, you have to finish top 10. It’s great to get an early start in the Road to Sunshine Tour,” he said.

“This circuit is such a great concept. Q-School is only 90 holes, but the Big Easy IGT Challenge Tour is a full season. The only way you’re going to punch your ticket is with consistency. The 10 guys who make it will have proven their consistency. And that’s how you keep your card.

“I was in a bad head-space after I lost my card. My confidence was at a low, but over the last few weeks I’ve felt the confidence coming back. I’m looking forward to the season and gaining a lot of experience to take to the Sunshine Tour this time.”

Mansfield birdied the final hole for a round of 68 and sole second on 14 under, while De Smidt took third on 12 under with a closing 70.

Glendower amateur Yurav Premlall took the low final round honours with a 66 that netted the BSI Golf Academy player from Glendower a share of fourth on 11 under with Nel (71) and Clinton Grobler (68). Premlall was one of two amateurs to make the cut alongside GolfRSA National Squad member Christiaan Burke, who closed with a 69 to tie for 10th on seven-under.