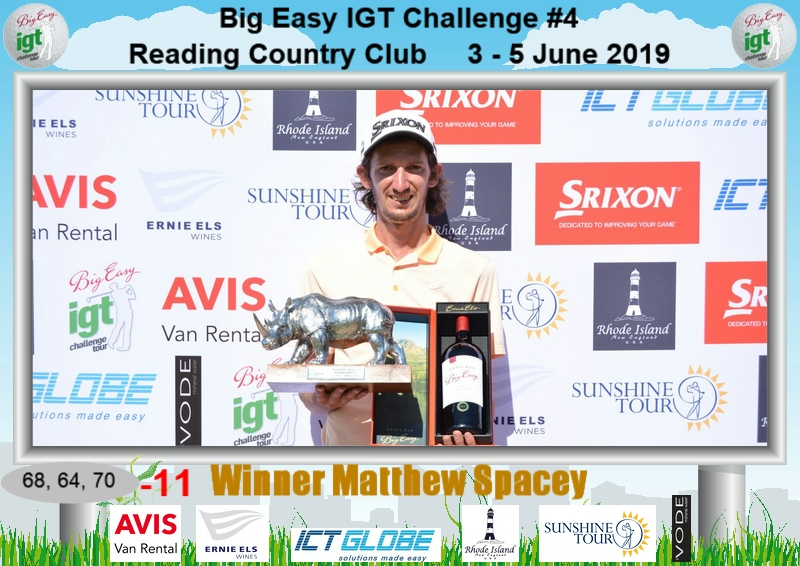 ALBERTON, 5 June 2019 – Matthew Spacey overcame a stumbling start to win his second Big Easy IGT Challenge Tour title by one shot after a final round battle with Albert Venter and Hendrikus Stoop on a tense and dramatic day at Reading Country Club.

It was not all plain sailing for the Dainfern golfer, who led the fourth event of the season by two shots after earlier rounds of 68 and 64.

Spacey was on the ropes at one stage after a run of three bogeys from the fifth hole, but got himself back in contention with an eagle at the par five eighth. Two birdies on the back nine, coupled with bogeys from Venter and Stoop, saw the trio head down the last hole tied for the lead.

Spacey drained a 35-foot birdie putt for a round of 70 and celebrated a one-shot victory on 11-under-par 202 after both his playing partners made pars.

Stoop and Venter shared second after posting rounds of 68. Michael Pfeifer carded 67 to finish in fourth on nine under, while rookie Carlo Heunis signed for the same number to finish in fifth on his own a further stroke back.

Win number two came with a R10 500 pay-day, which catapulted Spacey to the number one spot in the Road to Sunshine Tour.

“I’m absolutely delighted,” said the 28 year old, “The goal was to win and although I made a sketchy start, I hung tough, turned things around with the eagle and was able to produce a strong finish.”

It had been a game of cat and mouse throughout the day between Spacey, Venter and Stoop.

Venter burst from the blocks with three birdies on the bounce, while Stoop followed a birdie start with a bogey at the second. Spacey carded four pars before getting on the bogey train.

“I was between clubs, so went with a firm 9-iron at the fifth and flew the green by 20 metres,” Spacey said. “I chipped it to 15 foot, but didn’t make the par putt. At the sixth, I hit a good tee shot, and a punched a 9-iron just short, but couldn’t up-and-down for par.

“At the next short hole, I pulled a wedge long and left and again, couldn’t up-and-down. I knew I needed to take advantage of the par five to get back in it. I hit a great drive down the middle and a pitching-wedge 15 foot short of the hole and boxed the eagle putt.”

Stoop also made three at the eighth, and when Venter dropped shots around the turn, the fight was on.

“It was a strange day,” said Spacey. “The wind gusted on and off and made club selection really tough. We all struggled, because you just didn’t know how the ball would behave.

“The lead kept changing hands. Albert led, then Hendrikus joined him and then Carlo got in front of both of them with eagle at 12 and a birdie at 14. I just stayed patient down the back nine. At 11, I hit a punch 7 to three foot and boxed the putt that got me back to 10-under and I hit a lob-wedge to 15 foot behind the hole and made the birdie putt to take the lead on 11-under.

“We were neck-in-neck heading down 18 and I was already thinking play-off,” Spacey said. “I hit a great drive and took a 9-iron in. It was a long, ropey putt but I had the line and I putt the perfect pace on the stroke.

“My goal was to win, and I’m really pleased that I got there. The hard work starts now, though. It’s all about maintenance. I need to make cuts and finish in the top five and maybe won one or two more to make sure I finish in the top six to get my card. But first, we’re going out to crack open this bottle of Big Easy and toast my win.”