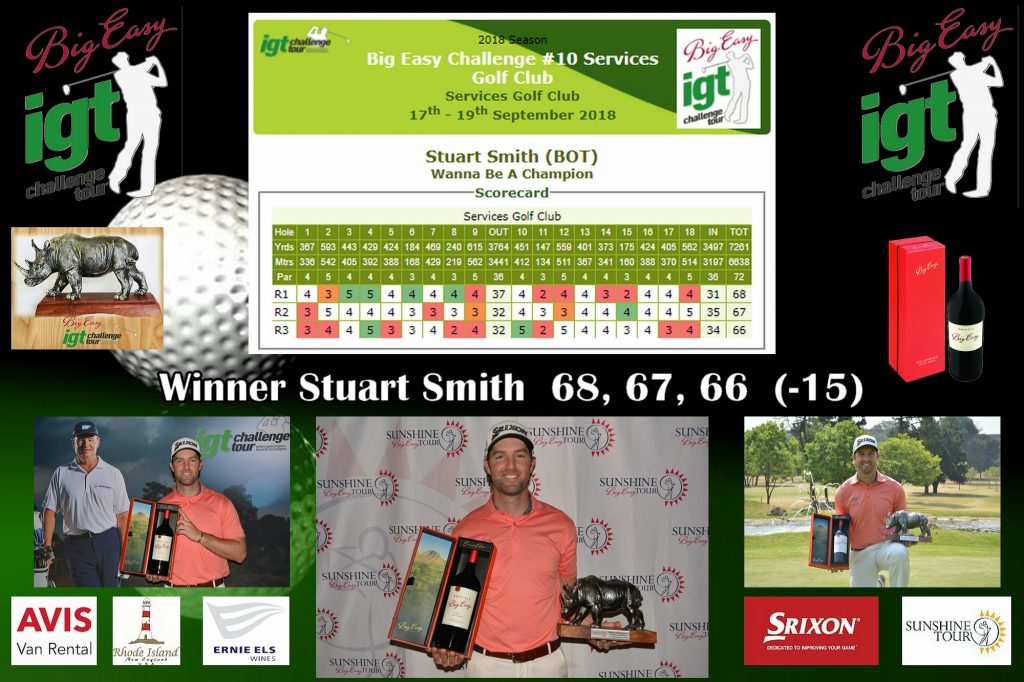 He finished two shots clear of overnight leader Juran Dreyer and fast-finishing Pieter Moolman, whose seven-under-par 65 earned him the low round honours.

Smith started the final round one shot adrift of Dreyer on 10-under, but he shifted the Free State rookie out of pole positon with a birdie-birdie start and never relinquished control.

Dreyer got it to 12-under with birdies at 12 and 15, but his efforts to force the tournament into extra time took a nosedive when he dropped a shot at the penultimate hole.

“I was 13-under and that left me free to play pressure-free golf over the last two holes,” Smith said.

“I birdied 17 and could play the last hole as a three shotter. I hit a great drive, put my second on the green and boxed another birdie putt. I’m really pleased with this result, because I really haven’t played well this season. Hopefully this sparks a better second half of the year for me.”

After a second round 67, Smith felt he had the game to win.

“I am striking the ball well and putting half-decent,” he said on Tuesday. “If I can get off to a fast start to put some pressure on Juran, I could pull it off.”

Solid ball-striking and a hot putter produced just the start he wanted. “The first hole was playing into the wind, and I hit two really good shots to give myself a birdie chance,” said Smith.

“I boxed the putt and hit the second green in two, and two-putted for birdie to take the lead. I still felt a bit of pressure, but the bogey at four took care of that. I hit a 2-iron up the right and had 95 flag, but I was a little worried about how the green would react so early in the morning.

“I hit sand-wedge in that pitched right in front of the flag, but the ball took a bounce and skipped off the green. I took the knock but boxed a nice seven-foot uphill putt at five for birdie to get back to two-under for the round.”

Smith turned four-under after a brace of birdies at eight and nine, but had another soft bogey at 10.

“I hit my worst tee shot of the day at 10,” he said. “I felt something in my shoulder on the downswing and I couldn’t stop at the top of my swing. I pulled it left into the trees, punched out into the greenside bunker and didn’t make great contact with the trap shot. Then I misread the par putt. Turned it around, though, with a bonus birdie at the next hole where I drained a 25-foot putt.

“Then I made five straight pars. I just stayed patient and waited for an opportunity to score. I had some chances, but the wind was really unpredictable and I felt happy making par on that stretch.”

The victory netted Smith a pay day worth R10 500 and the Randpark golfer launched from 46th to 14th in the Road to Sunshine Tour rankings.

“The goal has been to get inside the top 10 by the end of the season so I earn one of the 10 cards for the Sunshine Tour,” said the Wanna Be A Champion Academy golfer. “There are still five events before the Tour Championship in December and a lot of guys wanting to get into the top 10, so there won’t be any slacking off. I’m just under R5 000 shy of the top 10 after this week, so it’s all to play for now.”

Dylan Mostert kept the top spot with a tie for fifth on five-under, while two-time champion Matt Bright hung on to second with a top 20 finish.