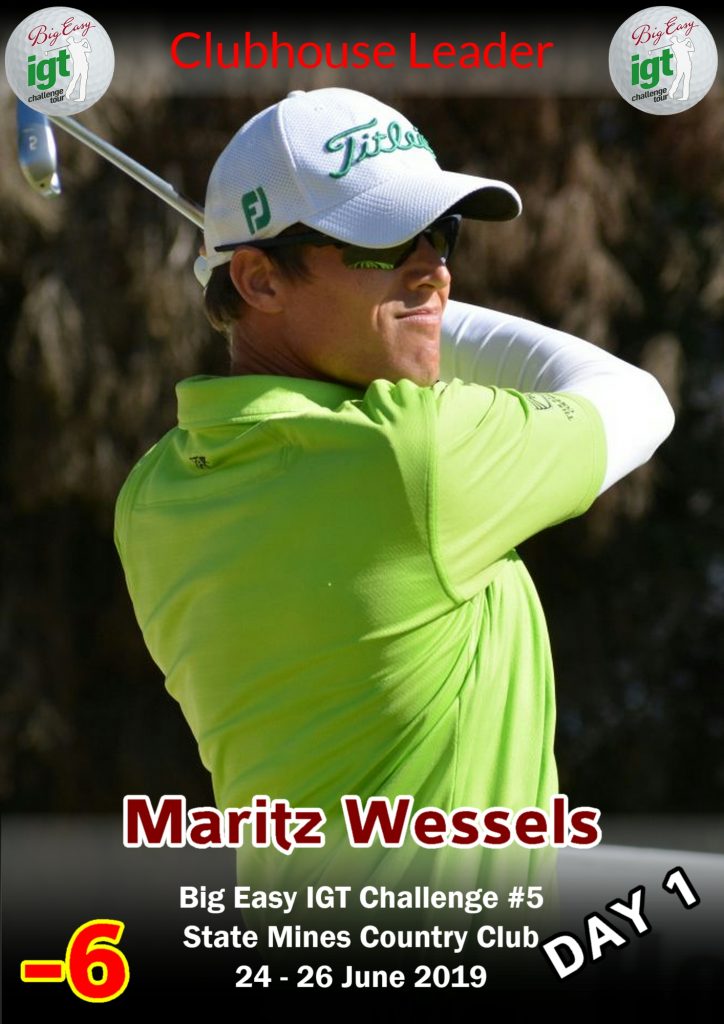 Steyn and Wessels lead the way at State Mines

Steyn and Wessels lead the way at State Mines

BRAKPAN, 24 June 2019 – Michael-James Steyn and Maritz Wessels topped a congested leaderboard at State Mines Country Club as they took Route 66 on the opening day of the Big Easy IGT Challenge Tour #5 on Monday.

Steyn set the clubhouse target at six under with loops of 33, but he was joined by former Big Easy Championship winner Wessels in the late afternoon.

Steyn spent the last two years coaching toddlers at pre-primary schools in the Fourways area, but the Stellenbosch native recently packed it in to devote more time to his career.

“If I’ve learned anything in the last two years, it’s that talent alone is not enough these days,” said the 24-year-old. “I don’t have any regrets because the experience taught me so much, but it’s really tough to juggle a full-time job and a golf career. Something had to give.

“I worked really hard at amateur level to reach the top and I’m going to have to focus all my energy on my game to make it to next level as a pro. So “I’m going to move back home at the end of the July to give it everything I’ve got.”

Steyn burst from the blocks with a birdie-birdie start and was four-under after another brace of gains at six and seven.

“I dropped a shot at nine, but I made a good up-and-down for birdie at 10 and then eagled the par four. Eleven is not really a driver hole, but I went for the green, finished just short and chipped it in for two,” said Steyn.

“I hit 3-iron off the tee at the last par five (15) and made a regulation birdie, but I had a brain-fart on 17 and made a silly bogey. You have to take your medicine and move on. Good par finish to leave me in a nice position. I was surprised to be leading, though. I definitely haven’t given golf enough attention, so I didn’t expect to be in front, but like I said, it’s a nice start and a good platform to build on.”

Like Steyn, Wessels is also looking at winging his way back onto the Sunshine Tour via the Big Easy IGT Challenge and IGT Challenge Tours.

“I lost my card at the end of 2015, and I haven’t had much luck at the Q-Schools,” said the 31-year-old Waverley resident. “The two development circuits both offer an incentive to the top finishers at the end of season. It’s a chance to bypass Q-School, so it’s a huge opportunity.”

Wessels picked up a trio of birdies in his first four holes and dipped four-under with a birdie 10. He gave a shot back to the field at 11, but recovered quickly with a gain at the par four 12th. An eagle and a birdie either side of a bogey at 17 saw him clock in with a 66.

“I struggled off the tees, but my iron-play was really good and putted extremely well today,” he said.

“I took advantage of some good approach shots early in the round but I also left quite a few birdies out there. I chipped in for the eagle at the par five, but then I got too greedy at the short hole and I hit it long. With the pin right at the back I was dead, so I chipped it up and two-putted for bogey. At 17, I knocked it close for two and boxed the five-footer for birdie.

“I haven’t had good results in my first three Big Easys, and I need to land a few top three finishes to move up in rankings, if I have any hope of finishing top six at the end of the season. The game is coming into form at the right time and hopefully I can keep it going for two more rounds.”