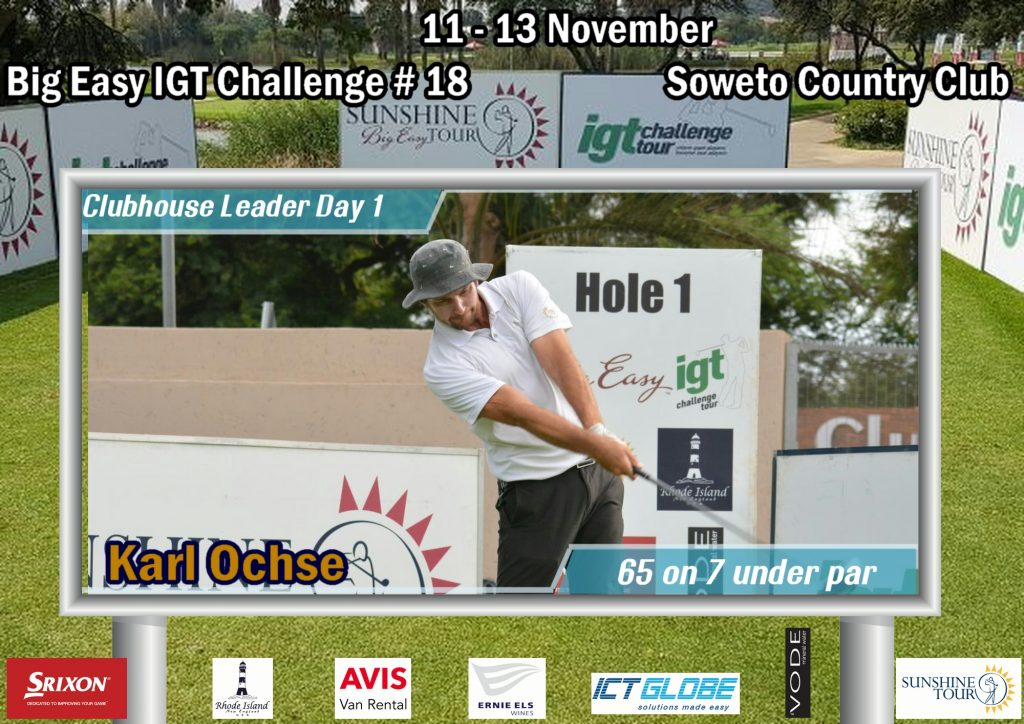 SOWETO, 11 November 2019 – Karl Ochse of Stellenbosch Golf Club closed with five birdies on the back nine on Monday to card a seven-under-par 65 at Soweto Country Club and take a one stroke lead after the first round of the Big Easy IGT Challenge #18.

After a fast start with two birdies in the first three holes, he made bogey on four and was afraid he was going to start repeating the implosions which have plagued him all season long, but he needn’t have worried.

He redeemed that dropped shot with a birdie on six, parred his way to the turn, and then got hot coming home. “I always get ahead of myself,” said Ochse of that early bogey. “When I dropped that shot, I thought, ‘Here we go again!’

“But it was really nice to score so well on the back nine, and, in fact, score well for the first time as a professional.”

He has carded four-under 68 twice this season, so 65 was comfortably his most impressive card.

“I need a good finish to get into the top 30 for the championship,” said Ochse of his fast start in the last event before the Big Easy IGT Championship scheduled for November 27 at Centurion Country Club.

Ochse leads by one from Desne van den Bergh, who won the Big Easy IGT Challenge #7 in July, and by a further stroke from Malcolm Mitchell of Kloof Country Club, who is a two-time winner this season with titles in July and September.

Swiss golfer Neal Woernhard is fourth on four-under, one stroke ahead of Clayton Mansfield and last week’s play-off winner Jason Froneman. Ryan O’Neill from England, Theunis Bezuidenhout, Ruan Kord and Fritz Orren round out the top 10.

It looks very much as if the current one to three – Allister de Kock, Dwayne Basson and Thabiso Ngcobo – are shoo-ins to finish in those three leading spots, however, Thabang Simon and Makhetha Mazibuko are still in with a shout.

Simon, who is fourth and R4 000 behind Ngcobo, opened with a two-over 74, while even-par 72 leaves Gary Player Class of 2019 member Mazibuko in the hunt, too. Two sub-par rounds could see Mazibuko erase the R5 000 deficit to overhaul Ngcobo for the third.

Ochse currently lies in 51st position on the Road to Sunshine Tour, and he will have to finish substantially better than his best of the season of a share of 12th in Big Easy IGT Challenge #3 back in May if he is going to punch his ticket to Centurion.

The tournament was the first visit by a men’s professional event to the newly renovated Soweto Country Club, and Ochse couldn’t speak highly enough about it. “The greens are perfect, the fairways play beautifully, and around the greens is just great,” he enthused.

“When the trees grow to their full size, it’s going to be a great course. Right now, a lot of them are small enough that we can go over them, so it reminds me a lot of courses in the Boland,” said the man who represents Stellenbosch Golf Club.

“I had a few testers for par on the greens today, and, while they were a little slow, they rolled perfectly,” he added. “I made important pars from about a metre-and-a-half to two metres on eight, 11 and 17, and even though I didn’t hit two of those putts particularly well, they still went in.”

While he’s aware of the quality of the players who are gathered behind him, he’s going to have to put them out of his mind going into the second round. “I’ll probably think about them,” he said, “but I really have to go out tomorrow and do more of the same. If I miss a fairway, or if I miss a green on the wrong side, I just have to try and make things right.”