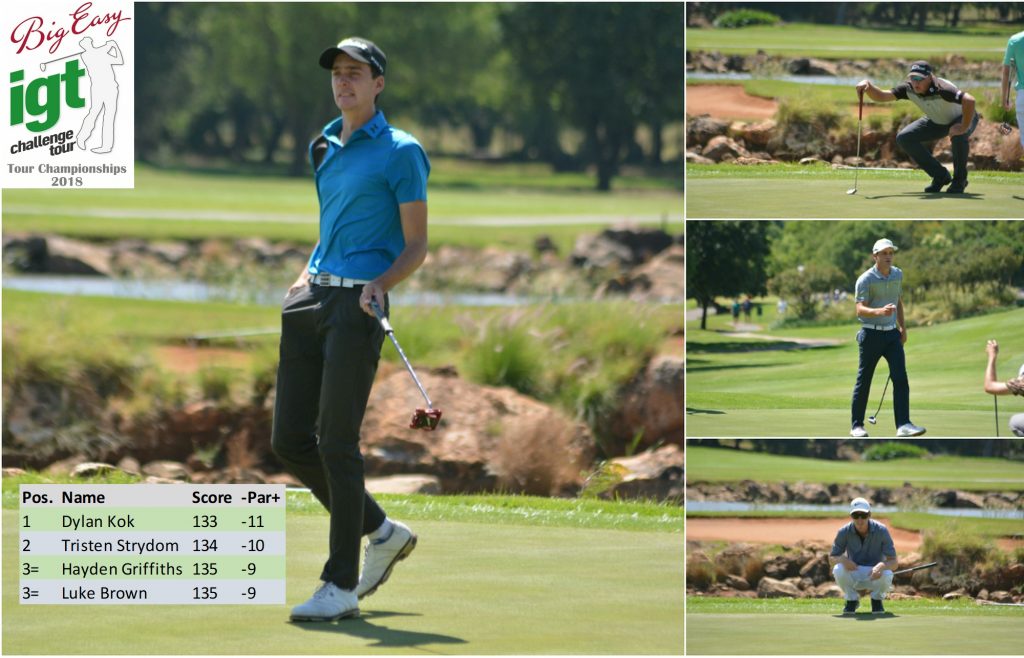 PRETORIA, 13 December 2018 – Tristen Strydom pulled within a shot of second round leader Dylan Kok to give himself a realistic shot of securing a Sunshine Tour card in the Big Easy IGT Tour Championship on Thursday.

It will all come down to the final round of the season-finale at Centurion Country Club on Friday. The top 10 ranked players in the final Road to Sunshine Tour rankings will earn playing privileges for the 2019/2020 Sunshine Tour, which tees off in April 2019.

The Woodhill golfer, who took route 66 to overtake overnight leader Luke Brown for the lead on 11-under-par 133, is currently third in the standings and virtually guaranteed a card.

For Strydom, though, it is last chance saloon time.

Ankle trouble and other injuries derailed his Big Easy IGT campaign this season and he earned just over R11 000 in four starts, leaving him well short of Hendrikus Stoop, who currently holds the number 10 spot with earnings of R22 063.

“It’s do-or-die time,” said Strydom, who pulled within a shot of Kok with a second round 67.

“To have any chance of claiming one of the cards, I have to play to win or finish no worse than second. The winner’s cheque is worth R32 000. Second gets you R23 000. To finish in the top 10, I’m going to have to play really solid and try to chase Dylan down.”

Strydom certainly has the track record to win.

The country’s former number one ranked amateur picked up his fourth IGT Challenge Tour victory in November last year and showed a tremendous return to form at the end of November when he won the First Stage of the Sunshine Tour Qualifying School.

The 21-year-old Pretoria Country Club golfer fired rounds of 71, 67, 64 and 66 to win by a massive 14 shots at Eagle Canyon. He knows he will need to produce the same masterclass golf on Friday.

“I’m striking the ball really well,” he said. “I made a good birdie start today, but I hit an errant tee shot at the second and had to chip out. I gave one back, but made up for it with a good birdie at five.

“I gave myself birdie chances at all the par fives, which is key to scoring well at Centurion. And I wedged it close at 10 to set up another birdie. There wasn’t any fireworks today. It was just a solid ball-striking round and I made some really good putts.

“It’s tough not to think about winning, because that’s the reality. And it will take a low one to pull it off. The leaderboard is tight. There are a lot of guys behind me that are also in the bubble and eager to win. Mentally, I am up to the challenge. Just need to get off to a solid start and take it from there.”

Brown and Hayden Griffiths, who will start the final round tied for third on nine-under 135, are ranked 17th and 25th respectively, and Duane Keun and Matthew Rushton, tied for fifth on eight-under, are 16th and 27th in the standings.