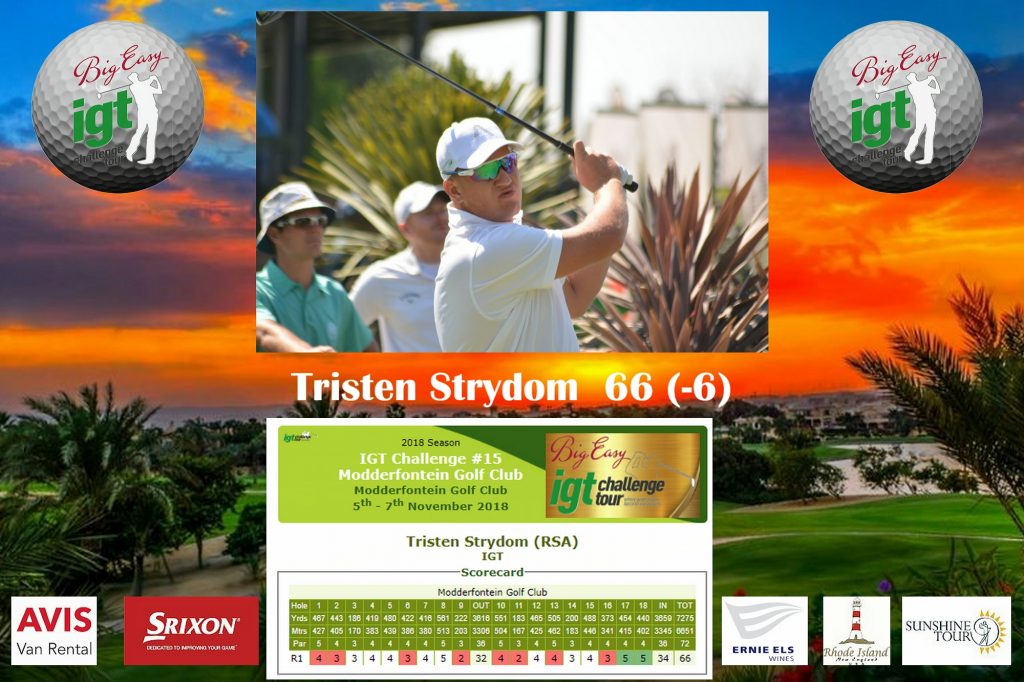 The Pretoria golfer burst from the blocks with back-to-back birdies on Monday and fired six more to dip to eight under, but he let the field back in with a bogey-bogey finish.

A multiple winner on the country’s premier golf development circuit, Strydom spent the last few months on the bench battling ligament sprains in his ankles. He made his return to competitive golf last week with a top 10 finish in the Big Easy IGT Challenge Tour #13 at Eagle Canyon and was thrilled to be in the hunt again.

“I made a great start and just played solid golf,” said Strydom. “I rolled in a couple of birdie putts you don’t usually make at Modderfontein and that kept me going. Just a pity about the finish, but you just have to take it on the chin. I’m really happy with the start and it feels great to be playing again.”

Lewthwaite, who won the IGT Challenge Tour #12 at Maccauvlei in September, was also pleased with a solid start as she prepares for Ladies European Tour Qualifying School in December.

“It was so great to see Nobuhle (Dlamini) win the A-Qualifier on the weekend to make it to final stage,” said Lewthwaite. “That’s why we play the IGT; it’s a great platform to prepare, because it’s really competitive. I had a hectic week with a golf day almost every day last week, so I took the weekend off to re-energise and it paid off.

Basson wasn’t the only Gary Player Class of 2018 member who had a good day on the course.

No doubt fellow member and IGT Challenge Tour regular Derek Peterson inspired the rest of the class with his runner-up in the Vodacom Origins Final at Pinnacle Point.

The Kuils River golfer led the way with a three-under 69 to tie for fifth with alongside Johannesburg rookie Keaton Slatter.