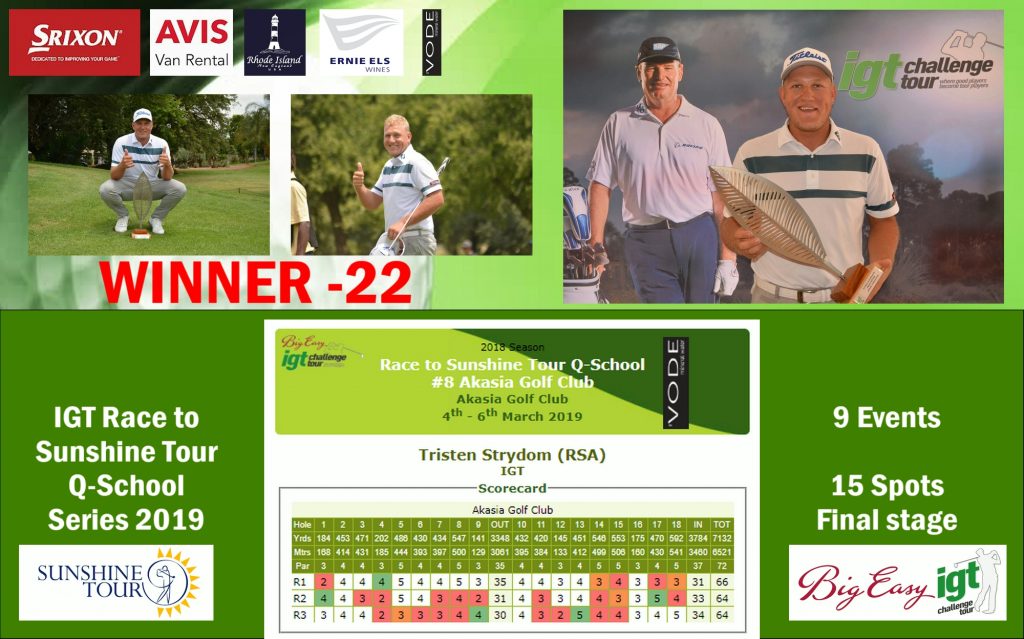 PRETORIA, 6 March 2019 – Tristen Strydom put on one of the classiest performances of the IGT Challenge Tour season with a brilliant performance at Akasia Country Club to lift his fifth trophy in the Race to Q-School #8 on Wednesday.

The Pretoria golfer was five clear at the beginning of the final round and produced a clinical and comprehensive eight-under-par 64 to finish the week on 22 under 194.

He finished an emphatic 11 strokes clear of his closest challengers, Jonathan Waschefort and Ruan Korb, who closed with respective rounds of 68 and 70 to share second.

Strydom relished the return to the winner’s circle.

“I played so well today,” said the Pretoria Golf Club member. “I hit all the right shots and made a lot of good decisions, which was really satisfying.”

Strydom began the week with a six-under 66 and catapulted into the lead with a second round 64 that featured eight birdies and an eagle three.

Heading into the final round, he could have been forgiven for looking over his shoulder at a hungry chasing pack, but instead, Strydom did what all great winners do at the crucial moment. He raised his level of performance and racked up four birdies from the fourth and eagled the par five fifth with crunching drives, lethal irons and a spitting hot putter.

“I really put my foot on the pedal,” said the 22-year-old. “The momentum shifted with the birdie at four and the eagle at five. That really took the round to another level.”

Strydom’s explosive opening loop set the tone for the day and he was untouchable from that point.

Any time he showed a slight weakness his recovery was instantaneous – birdies at 11 and 12 countered the drop before the turn and another brace of gains at 14 and 15 erased the bogey at 13.

A trio of pars to finish ensured the most comprehensive of victories and equalled the IGT Challenge Tour’s all-time 54-hole record, set by Danie van Tonder at Houghton Golf Club in 2016.

“I played the back nine really well all three days and that was key to the win,” said Strydom. “I went six-under over the last five holes in round one, which got me within two shots of the leaders. And four-under in round two earned me the five shot lead overnight.”

After a lengthy lay-off due to ankle and other injuries last year, Strydom showed glimpses of the form that took him to the number one spot in the GolfRSA Open Amateur rankings for more than a year and carried him to the winner’s circle four times on the IGT Challenge Tour at the First Stage of the Sunshine Tour Qualifying School late last year.

A 14-shot victory at Eagle Canyon earned him a spot for the Final Stage at Houghton Golf Club in two weeks. Now the sole focus is converting that start into playing privileges for next season.

“I feel like I’ve turned a huge corner,” he said. “I owe a lot to my caddie Kyle Lundy, and to my parents. They stuck with me and supported me through some tough and frustrating times.

“The game feels really good and the confidence is back. We have one last Race to Q-School at Reading next week before Final Stage and I’ll be going all out. I want to be as ready as I can possibly be for Houghton. You only get one shot at Final Stage and you have to make it count.”