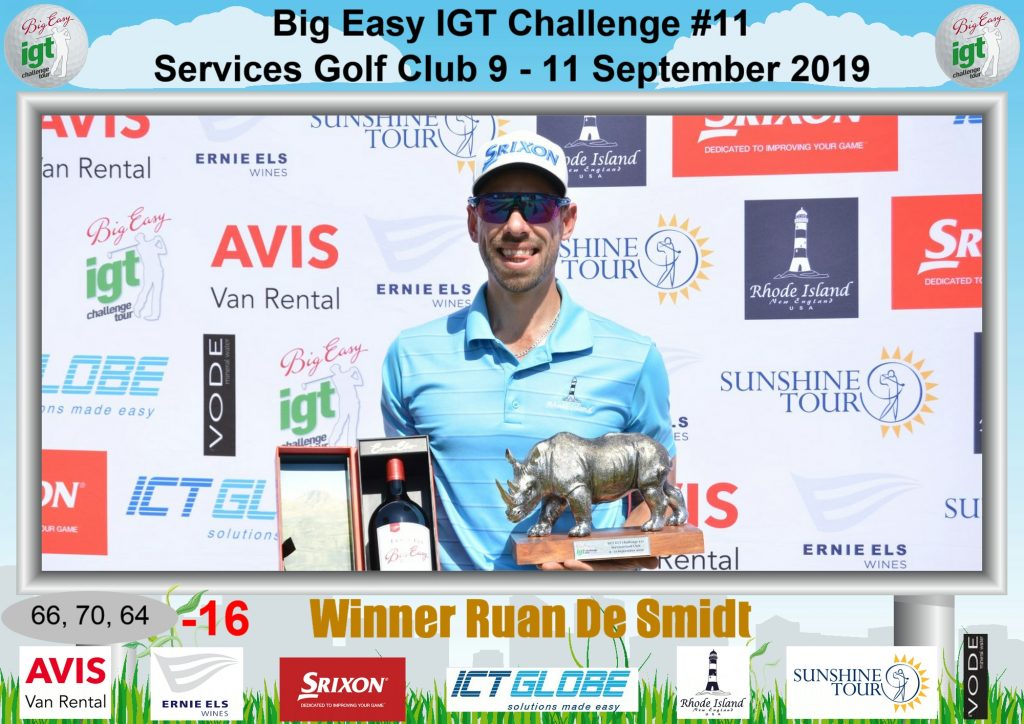 Coming off three successive top-10 finishes, De Smidt performed according to the formbook.

The 29-year-old Krugersdorp golfer fired a final round eight-under-par 64 to come from behind and win by four shots on 16-under-par 200.

“I am really pleased to have pulled it through at last,” said the champion.

“I pulled my brother (Darin) in to help me with my driver and I am hitting the ball as good as I’ve ever hit it in my career. The results started to show and it’s my go-to club now. I was in the mix in my last two Big Easy IGT starts and I tied for ninth in the Kings Cup, so I knew coming back from Swaziland that I was trending towards a win. It’s satisfying to lift a trophy again; it proves that I’m on the right trajectory.”

De Smidt won four times on the Sunshine Tour, but lost his card at the end of last season.

“I had a shocking season, but these things happen. It was a huge blow, but lucky for guys like me the Big Easy IGT is our mulligan. We can stay competitive, work on our games and get back on tour without having to go through the trials of Q-School again.”

De Smidt racked up seven birdies for a round of 66 on day one and force his way into a three-way tie for the lead with Road to Sunshine Tour leader Malcolm Mitchell and Matt Spacey – both two-time winners this season.

“I’ve never played Services, so Darin gave me his notes,” De Smidt said. “I made a great start, but I was nowhere over the first eight holes on day two. I played the back nine really well, though, and got myself within striking distance again.”

KwaZulu-Natal rookie Mitchell began the final day in the lead on 12-under.

Centurion winner Desne van den Bergh was two off the pace and Boland golfer Luan Boshoff a further shot drift, while De Smidt started his title bid in a three-way tie on eight-under.

He made a birdie-birdie start, but three-putted the third.

“With Malcolm gunning for a hat-trick, we all knew we needed to make a fast start and I knew I needed to go deep after that bogey,” said De Smidt, who birdied the fifth before he went on the rampage with four birdies and an eagle between the ninth and 13th holes.

“I boxed a 15-footer on 10 for birdie, pitched the green on 11 and got a little lucky when the ball clung to the edge and didn’t roll down the slope. I made quite a long birdie putt, but on the par five the ball didn’t stay up and rolled down the slope. I had a hallelujah putt but holed it for eagle.

“On 13, I hit my second to give. I short-sided myself on 15 when I thought I was hitting into a crosswind and the wind changed. The hole played downwind and I overshot the green by 50 metres. I couldn’t up-and-down to save par, but I knew I had a chance to get it back to 16-under with a par five coming.

“I played the last hole conservatively. I got my tee shot got past the trees, but I still had 210 metres to the flag, so I hit a 6-iron front left to take the water out of play. And made another solid up-and-down for birdie to get the job done.”

The top six players at the end of the season-long series will earn full playing privileges for the 2020/2021 season. With the win, De Smidt has his foot on the bottom rung of the ladder.

“After the Kings Cup I moved to 31st on the Sunshine Tour Order of Merit, so I am in a good position but I’ve also learned not to take anything for granted. “This win puts me in the sixth spot on the Road to Sunshine Tour. If I can hold on or improve, I’ll double my chances.”

Mitchell closed with a level par 72 to finish in second on 12-under, which further strengthened his lead on the Order of Merit, while Van den Bergh shared the runner-up spot after signing for 70.

Jeff Inglis and Albert Venter tied for fourth on 11-under after carding a pair of 68s.

Gary Player Class of 2019 member Allister de Kock retained his position at the top of the Big Easy IGT Transformation Order of Merit with a top 20 finish.

Makhetha Mazibuko hung on to the second spot with a tie for 27th on four-under, while Centurion Country Club’s Thabiso Mgcobo put in another strong performance. A final round 67 for a share of 13th on seven-under boosted the Phelan Golf Academy player to fifth in the standings.