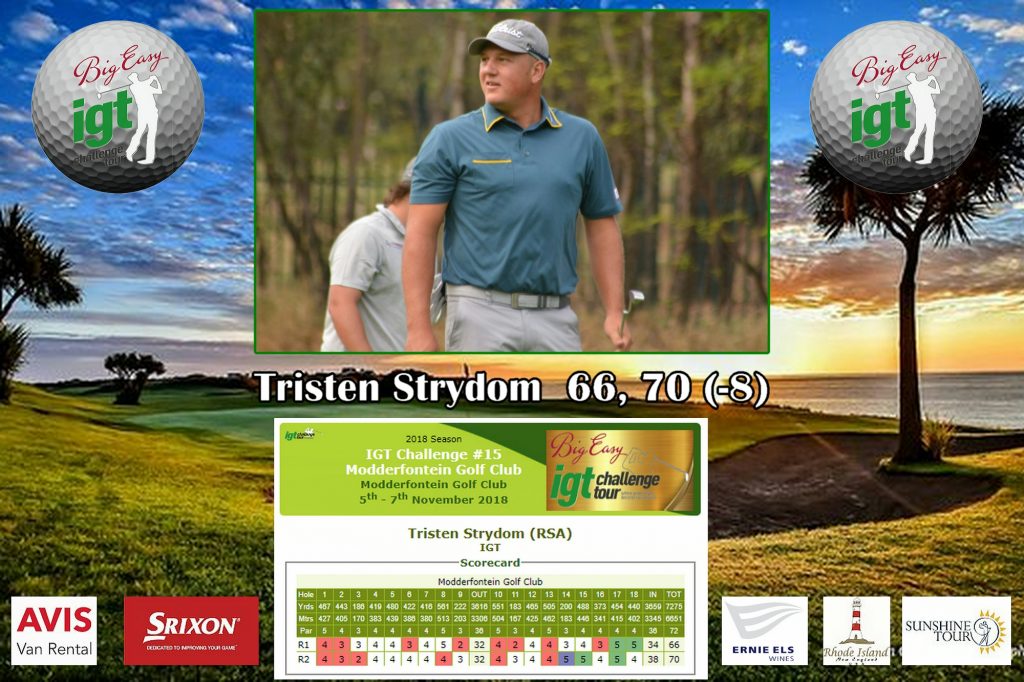 Trio ready to chase down Strydom in IGT Modderfontein

Trio ready to chase down Strydom in IGT Modderfontein

MODDERFONTEIN, 6 November 2018 – His finish wasn’t great, but his round was still good enough help Tristen Strydom maintain the overnight lead on six-under 138 in the IGT Challenge Tour #15 at Modderfontein Golf Club on Tuesday.
The Pretoria golfer squandered four shots in his last five holes for two-under 70 and will start the final round two shots clear of Lejan Lewthwaite, Bryce Myburgh and Herman Loubser.
Strydom was four clear on eight-under in the first round before he faltered with a bogey-bogey finish for a 66. The closing stretch proved to be his undoing once again. The 22-year-old started with three birdies on the bounce and was well clear of the chasing pack after further gains at eight, 10 and 13, but a double bogey at the short 14th and bogeys at 15 and 17 let the field back in.
Benched with ligament sprains in both his ankles for a couple of months, Strydom only returned to competitive golf last week, but a top 10 finish in the Big Easy IGT Challenge Tour #13 at Eagle Canyon was proof positive that the former number one ranked amateur is ready to do battle.
To bag his fifth title on the country’s premier golf development circuit, Strydom will have to stave off challenges for the fierce threesome on his heels.
Lewthwaite, the first female winner on the IGT Challenge, backs herself to win again.
“I started a bit wobbly with two bogeys, but I kept my cool and I made a nice bounce-back birdie when I stuck my 6-iron stiff at the third,” said the Benoni golfer. “I birdied the par five (eight) to get back to level par and birdied 10 to go two-under.
“Not much happened until I had a soft drop at 15, but I bounced back when I holed out with a gap-wedge for eagle at 16. The ball pitched six metres past the pin, spun back and dropped. I wasn’t too happy about the drop at 17 where I missed a three-footer for par, but I made a clutch birdie at the 18th to finish two off the pace. It should be a great fight tomorrow and I ready for action.”
Myburgh and Loubser are both still chasing that elusive maiden win on the IGT Challenge Tour.
Like Lewthwaite, Myburgh started the second round two shots behind Strydom. The Umhlali golfer, who plays out of Steyn City, fired six birdies to stay in touch with a two-under 70.
“Overall I was happy with my play today,” said Myburgh. “I found that the wind picked up a little on my back nine and made it a little tricky. I played very solid throughout the round and without the four bogeys it could’ve been a very low one.
“I’m hitting the ball well and making a handful of putts. I haven’t made any big mistakes over the two rounds and I feel that this is why I am up on the leaderboard with a chance to win. I had a silly three putt on my last, but still can’t be too unhappy with an under par round. It should be a good final round as there are a bunch of good players that will be playing for the win and I look forward to it.”
Loubser returned a four-under 68 that featured eight birdies – three from the first and four from 10.
“I’ve gotten off to a great start both days,” said the Theewaterskloof golfer. “I started with three birdies in a row and then broke the momentum straight away with two bogeys and a double at six.
“It wasn’t ideal, but I’m pretty confident at the moment, so I knew there were lots more birdies out there and I made four in a row from 10 to 13. I look forward to playing with Tristen in the final round. He’s a good friend of mine and we played a lot of golf together as amateurs. It’s been ages since I’ve last played with him. If I can keep those pesky bogeys to a minimum tomorrow, I should have a pretty decent chance. Can’t wait.”
Behind the trio in second, at least four players could also mount a challenge in the final round.
Ruan Korb is in good shape at five-under after carding a flawless 66. Andrew Carlsson and Gary Player School of 2018 member Allister de Kock both returned rounds of 67 move to four-under and join rookie Keaton Slatter, who signed for 71.