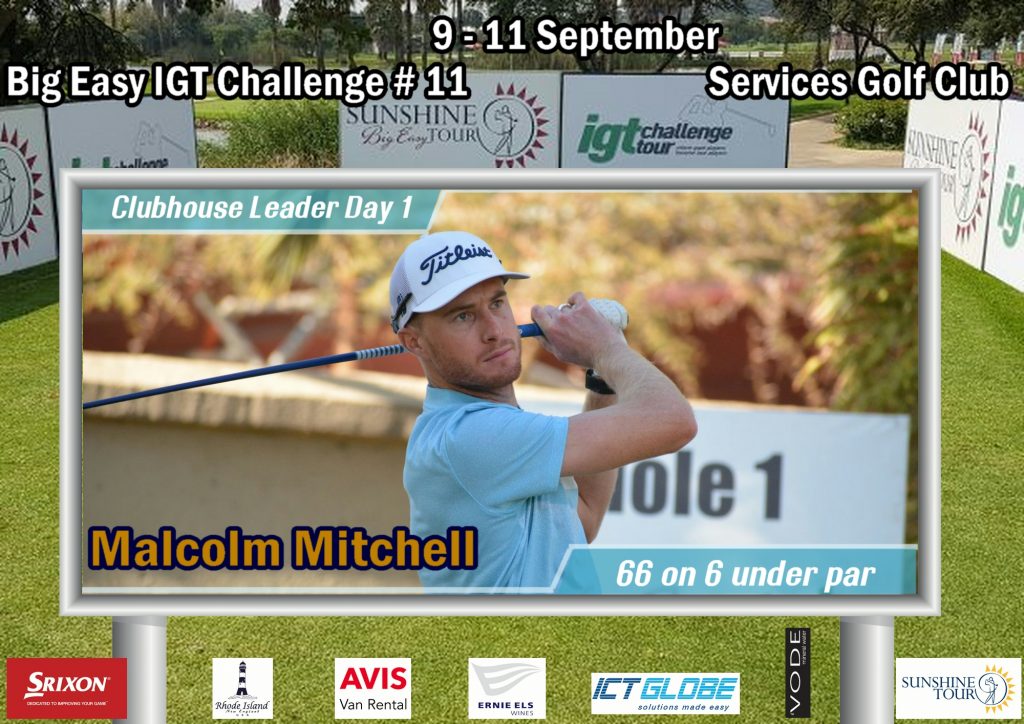 PRETORIA, 9 September 2019 – Malcolm Mitchell, Matt Spacey and Ruan de Smidt made the most of scorable conditions at Services Golf Club to share the lead in the first round of the Big Easy IGT Challenge Tour #11.

Mitchell and Spacey capitalised on an early start with rounds of 66 to set the early clubhouse lead and for a long while it looked like none of the afternoon starts could catch them.

Enter four-time Sunshine Tour winner De Smidt, who carded a total of seven birdies to go six-under and make it a three-way tie at the top on Monday.

South Korea’s DK Kim, Clinton Grobbler and rookie pair Gerhard Pepler and Keaton Slattery finished one shot off the pace, with a group of five players a further shot adrift.

Mitchell – the current leader of the Road to Sunshine Tour rankings – was the only one among the pacesetting trio to clock in with a clean card.

“I was happy with today; I just started off very solid again,” said Mitchell.

“I birdied the second and chipped in for birdie at the fourth and then had a nice little run from the ninth. I holed a bunker shot for eagle on nine and made solid birdies at 10 and 11.

“I drove it down the middle on 10, wedged it to 15 feet and made the putt. And another good approach on 11 set me up nicely for another birdie. I kept the round ticking over with pars, but unfortunately I didn’t take advantage of the two par fives coming home. I had three-putts on both the 12th and 18th holes. That stung a little, but otherwise it was a solid round.”

In recent months, the KwaZulu-Natal rookie has worked hard on the weaker points of his game and the effort has paid off with two wins, a runner-up finish and two top-10s in his last six starts on the golf development circuit.

“I’ve been working on my wedges, because they cost me in a couple of events, and I’ve worked on my putting,” he said. “There is nothing really wrong with my putting, but you put in the graft because you can never make too many putts.”
Spacey and De Smidt are both looking to finish in the top six at the end of the Big Easy IGT Challenge Tour season to regain playing privileges on the Sunshine Tour. While De Smidt has risen to eighth in the Road to Sunshine Tour, he is still chasing that elusive first win.

Spacey, however, has made two turns in the winner’s circle and sits comfortably in the second spot in the Road to Sunshine Tour.

“I had a really, really solid day,” said the Dainfern golfer. “I had a lone bogey at the fourth, where I missed a four-footer for par, but otherwise I made very few mistakes.

Birdies at the second and fourth set a positive tone for his round and he also enjoyed a profitable run around the turn, racking up four birdies.

“I nearly had an eagle on 12. I drove it down the middle and hit 6-iron to eight feet, but I left the eagle putt in the throat. And I made one birdie at 14 coming home. I’m really pleased with the round.