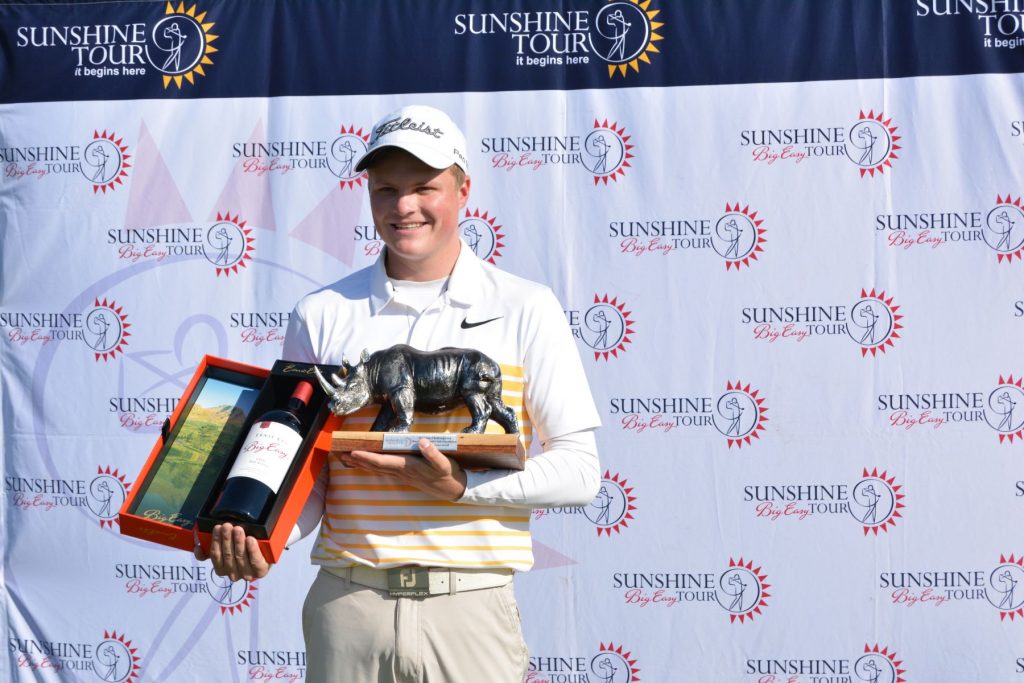 RANDPARK, 6 June 2018 – Pretoria teenager Otto van Buynder staged a dramatic comeback to seal a sensational maiden victory on the Big Easy IGT Challenge Tour at Randpark Golf Club on Wednesday.
In just his second start on the new golf development circuit, Van Buynder led by six shots overnight, courtesy of an opening 11-under-par 61 and 70 in the second round at the Firestone Course.
Some thought it would be just a formality for him to win. Others thought the 19-year-old amateur would crumble under pressure.
Van Buynder did bend under the stress but, despite a very shaky front nine, he staved off a charging DK Kim to close out a two shot victory with a final round 73.
“I got it done thanks to three holes,” said the delighted HPC Golf Academy player, who beat the Korean by two shots on 12-under.
“I was nervous at the start of the round, especially after I bogeyed at two and three. A couple of guys made some early birdies and chipped away at my lead. I told myself it’s got to stop.”
Van Buynder stemmed the bleeding with a birdie at four, dropped another shot at five and recovered with another gain at six. “When I dropped at nine, DK closed in,” said the Blue Valley golfer.
“He had five birdies on the front nine and two more at 12 and 14 to cut my lead to one shot. So I had two choices: step it up or break under the pressure.
“I hit my tee shot at 10 left into threes. I had to punch out sideways and I ended up where the rest of the guys had hit their drives. I got on the green with my third and holed a six metre putt to save par. That was one of the key moments of the round.
“I made a good par at 12 and hit a solid drive down the 12th fairway. I had 235 metres to the pin and hit a four-iron in. I was facing a 15 metre downhill putt, but I drained it for eagle. Now the adrenaline was flowing.”
Van Buynder nearly holed out for another eagle at the par-five14th. He tidied up for birdie and made a solid par at the short hole, but another setback at 16 put Kim in the frame again.
“My second shot went right and I was pin-high right under the trees with some branches in the way,” said Van Buynder. “I clipped the branches and the ball dropped on the green and rolled all the way down into the water. I walked off with a seven on my card.
“With DK just one shot behind again, I needed another birdie and 17 saved the day. It was playing 195 metres and I hit a six-iron to 12 metres and holed that triple-breaker to go 12 under. Then I heard that DK dropped at the last for a 67, so I knew I had two putts to win.
“I didn’t do anything risky. I hit two-iron off the tee, two-iron into the green and two-putted for par and the win. This was without a doubt the biggest test in my career and to win wire-to-wire at this level is absolutely fantastic.”
Seasoned campaigner Neil Cheetham made an early run with back-to-back birdies at two and three and an eagle at the par-five fourth, but it was a bridge too far to cross. Cheetham had a another eagle on the back nine, but a final round 67 left him in third on nine under.
Paul Boshoff also got into the mix with birdies at three and four, but his challenge lost steam. Boshoff signed for a 70 to finish fourth on eight under.