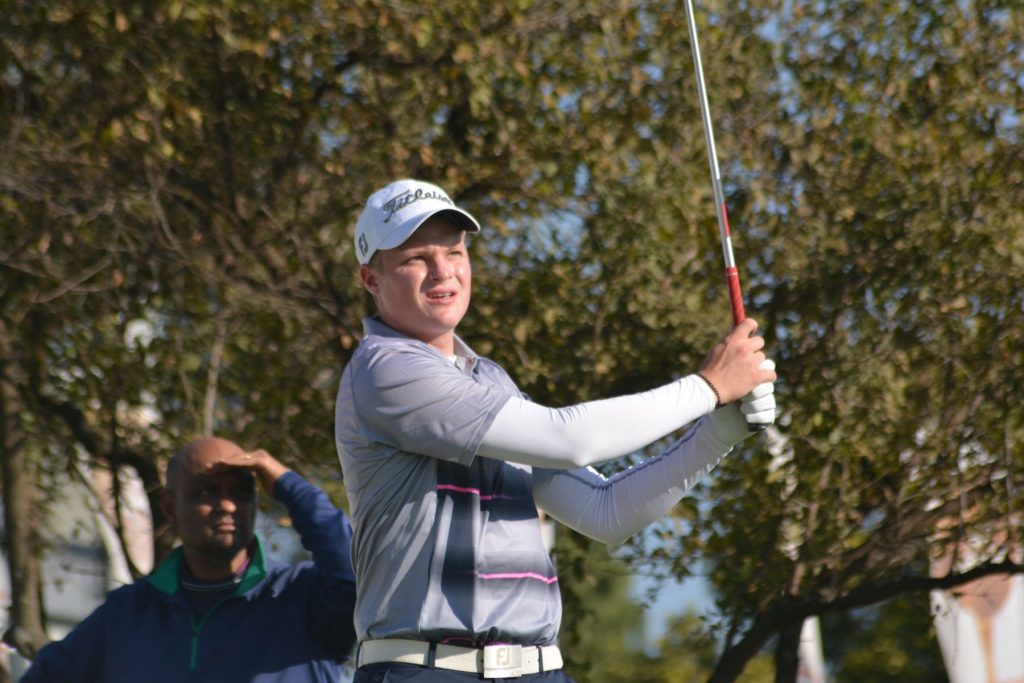 RANDPARK, 4 June 2018 – Otto van Buynder came close to producing the first 59 in Big Easy or IGT Challenge Tour history in the first round of the fourth Big Easy IGT Challenge Tour event at Randpark, but the amateur had to ‘settle’ for a brilliant 11 at the Firethorn on Monday.
The 19-year-old from Blue Valley Golf Estate was in irresistible form as he compiled an eagle and nine birdies in the space of 15 holes to set up the chance of shooting golf’s magic number.
But after three birdies on the bounce from the fourth to get to 11-under, Van Buynder dropped his only stroke of the day at the par-four seventh.
On a day when only 19 players broke par, the amateur still laid down a huge marker and opened up a six shot lead on closest challenger, Paul Boshoff.
Eric Nel, Drikus van der Walt and amateur Aneurin Gounden tied for third on four under, while Virginia Tech golfer Slade Pickering finished a further shot adrift.
Van Buynder had three birdies on the trot from 11 and eagled the par five 14th. A birdie at 18 took him through the turn on six under, and he racked up a further five birdies – including another string of three from four – before the bogey at seven put the brakes on his flawless run.
“I had 165 to the flag and went with a 9-iron, but I didn’t make great contact with the ball and ended up short in the bunker,” said Van Buynder, who signed off with a birdie at 18 to finish the loop five under.
“I had a little help on the last hole, though. I hit a huge drive, but I pulled it a bit and it hit the IGT board on the 10th tee. I had to chip from about 40 metres out. I had a tricky right to left putt of four metres, but I had the line and I got the perfect pace on the putt.
“I knew I was going low and the idea of a 59 did enter my mind, but I blocked it out. I tried to focus on one shot at a time and do what I needed to do on the course and it worked out well.”
The HPC Golf Academy player and fellow Gauteng North amateur Keegan Mclachlan will be leaving for the United States in a few weeks to take up golf scholarships at Louisiana Munroe University.
The pair began competing on the IGT Challenge Tour in May to keep competitive during the lull on the amateur circuit and made an impression in their previous two starts.
Mclachlan tied for fourth on the IGT Challenge Tour at Wingate and finished in the top five in the third Big Easy IGT Challenge Tour event after leading the first round at State Mines. Van Buynder tied for eighth in both events.
“We don’t want to arrive in the US all rusty; we want to take some form with us, so it’s really great to have a circuit to play competitively,” said Van Buynder. “That’s what I like about the IGT Challenge Tour and the Big Easy IGT. There is just so much more competition; it gets you a lot sharper.
“You have to be on your game. The guys that are competing for those 10 cards on the Sunshine Tour mean serious business. I’ve actually shot 61 twice this season, but both times in practice rounds on the amateur circuit at Waterkloof Country Club and Rustenburg Golf Club. But to shoot 61 under this kind of pressure is pretty special.”