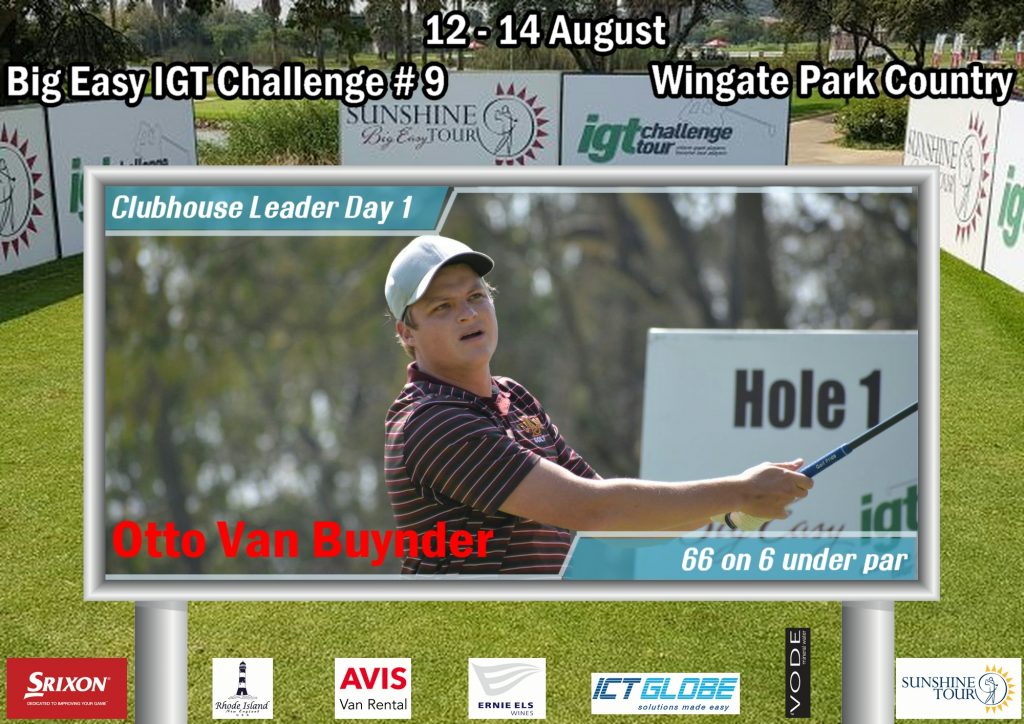 PRETORIA, 12 August 2019 – Pretoria amateur Otto van Buynder fired a pacesetting six-under-par 66 to open up a one-shot lead in the first round of the Big Easy IGT Challenge Tour #9 at Wingate Park Country Club on Monday.

The former Sunshine Tour champion sits just three shots off the pace in a group of eight players on three-under, including Gary Player School pair Teboho Sefatsa and Makhetha Mazibuko.

Van Buynder bagged his first win on Big Easy IGT Challenge Tour at Randpark in June last year, just a week before he headed to the United States to take up a golf scholarship at Louisiana Monroe University.

Taking pole is nothing new for the former Tshwane Junior Open champion, but leading the field in just his fourth after 10 weeks on the bench left the 20-year-old out in high spirits.

“Just after we start our Spring Break in May, I had a run-in with a club car and I came off worse,” joked Van Buynder. “The tips of my middle finger and pinkie were just hanging, but the x-rays I had in the USA didn’t show anything wrong.

“As soon as I got home, I went to see our family doctor and he discovered that I had torn the nerve right off the bone. I went under the knife and they put pins put in my hand. I was very frustrated to sit around for 10 weeks, but in retrospect I think it was very good for my game, because I was really hungry to going again.”

“I won the Blue Valley Club Championships at the end of July and finished fifth in the Big Easy IGT at Centurion,” said Van Buynder, who tied for 12th on the IGT Challenge Tour at Krugersdorp Golf Club last week.

“It’s really great to have such a strong competitive circuit here at home. This is really helping me to get back to form before I head back to the USA.”

Former SA Amateur champion Germishuys and Barker – already a winner this season – set the early target on five-under, but afternoon starter Van Buynder leapfrogged the pair for the top spot with seven birdies.

“I turned two-under after a trio of birdies and a soft three-putt bogey at the seventh, but I got it to four-under with a birdie-birdie start on the back nine,” Van Buynder said. “I rolled in a left-to-right slider from seven metres for birdie at 10 and boxed a four-metre putt on 11.

“I birdied the next par five (12) and made some good pars until 18, where I went for the green. I drove it down the middle and had 185 metres flag left. I hit a 7-iron in and two-putted for birdie. I didn’t expect to be leading today, but it feels great to be back to full strength. I’m relieved, more than anything, that the 10 weeks downtime didn’t adversely affect my game.”