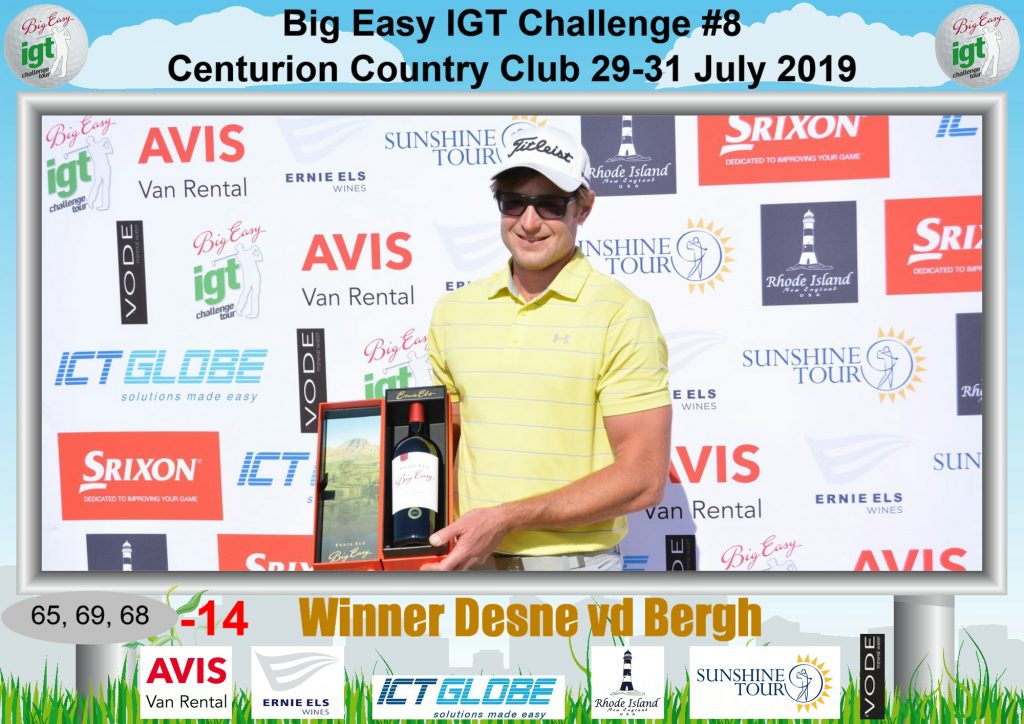 The Vaal de Grace golfer was over the moon after he closed out victory on 14-under 202 on a dramatic final day.

“I am absolutely over the moon to be in the winner’s circle,” said the 29-year-old, who edged out Malcolm Mitchell with a final round four-under-par 68.

“It was touch and go at the end and I won with a bogey, but I finally got it done. After a hat-trick of second places, lifting the trophy validated all the hard work I’ve put into my game in the last couple of months. This means so much to me.”

Van den Bergh entered the final round two shots behind Mitchell, who was targeting a second victory in the eighth event of the series.

The 36-hole leader got off to a blistering birdie-birdie start and kept clear of the chasing pack with birdie number three at the fourth, but Van den Bergh kept pace with a quartet of birdies.

“I drove it down the middle at the first, hit a 7-iron to the middle of the green and two-putted for a birdie start,” said Van den Bergh. “I hit a wedge to eight feet on the third and made the birdie putt, and on the fifth, I hit a huge drive just short of the green, chipped it two feet short and boxed the putt.”

Van den Bergh made a great up-and-down for birdie on the par-five seventh to move to 14-under and was still trailing Mitchell by one shot heading home.

“Malcolm birdied 10 and I made a momentum birdie at 11 to stay with him,” said Van den Bergh.

“I hit a great drive and had 170 metres flag. The wind was into us from the left and I hit an 8-iron six feet past the flag, leaving myself with a dead-straight putt. On 15, Malcolm hit his drive out of bounce, but made a great recovery to save par.”

Everything changed for Van den Bergh on the par-three 17th when Mitchell’s tee shot finished in the drink.

“I had a two-shot lead playing the last and all I could think about was not messing it up. The wind was off the left and I struck it well, but the ball took a weird dip and plonked in the water,” Van den Bergh said. “Malcolm’s tee shot ended in the bunker, so I knew I still had a chance.

“I pulled the wedge-shot from the drop zone and it finished left and long. I chipped it to two-feet and after Malcolm two-putted from 30 metres, all I had to do was to tap-in for the win. We had a great contest and it feels pretty great to come out on the winning side for a change.”

While a R10 500 pay-day boosted Van den Bergh to fourth in the rankings, Mitchell’s consolation prize was the number one spot on the Road to Sunshine Tour.

“One bad shot cost me the win, but you can’t get hung up on stuff like that,” said Mitchell, who tops the rankings with earnings of R36 363 after eight starts.

“The goal in each tournament is to be in contention on the last day and to finish in the money, so I really can’t complain. I’ve got a nice R6 000 cushion. Hopefully I can keep the run going until the end of the season.”

The top six ranked players at the end of the season will gain full cards on the Sunshine Tour, and the top three players on the Transformation Order of Merit for previously disadvantaged competitors will also earn playing privileges for the 2020/2021 season.