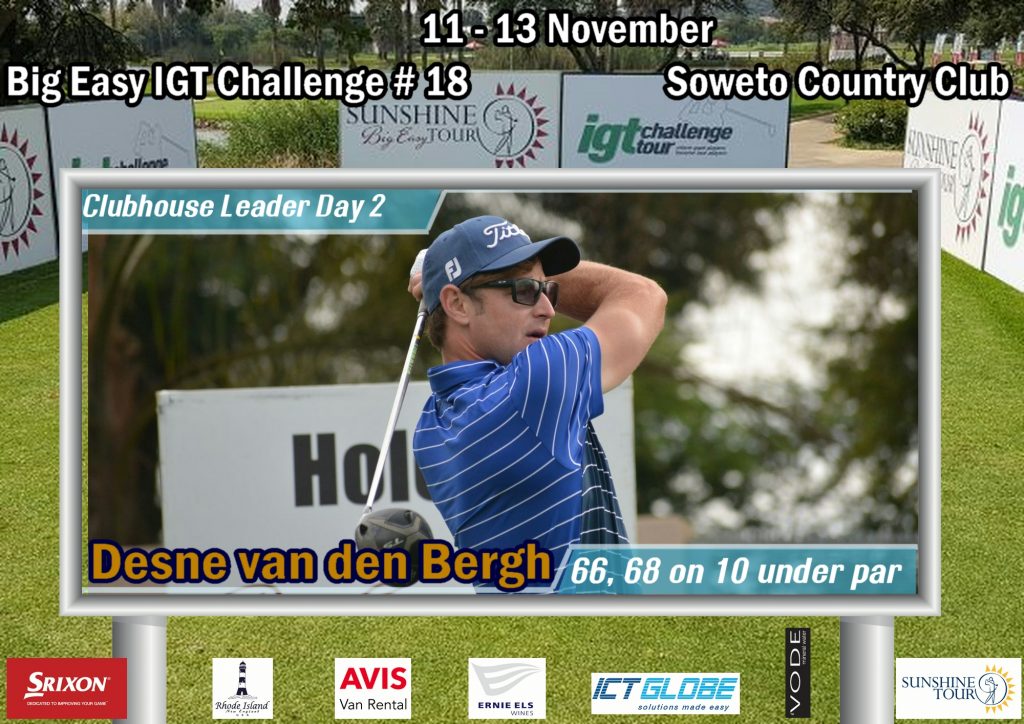 In second is overnight leader Karl Ochse of Stellenbosch Golf Club on eight-under after a second round 71, with Malcom Mitchell of Kloof Country Club a further stroke adrift in third after a 70 on day two.

The 29-year-old Van der Bergh first joined the winners’ circle with a triumph at Centurion Country Club in the eighth event on the Big Easy IGT Challenge Tour in July.

Van Der Bergh came into the week in sixth position on the Road to Sunshine Tour and with just the Tour finale remaining after this event, a win would go a long way in getting Van den Bergh back on the main circuit. But being on the verge will also mean increased pressure, if the cauldron of vying for bragging honours in Soweto was not enough.

“You try to forget about the Order of Merit position, but it’s always there. I’m just going to go out and play the final round and see how well I can do,” said Van der Bergh.

“I think it will be good for my confidence going into the tour champs because I want to finish top six. I think with a victory I’m one step closer to that. I think it would mean a lot of opportunities to play.”

Starting on the 10th, Van der Bergh’s round included four birdies in his first six holes.

“I started off well, hit it right off the tee on 10 and recovered well with a punch shot and I got it up and down for birdie and I think that set the tone for the day,” said Van der Bergh.

“I made three quick birdies, but on 17 I hit a nine-iron on the par three which led to a double. And it was my only five on the card.

“I’m driving the ball well and that’s key around this course. The greens are a bit slow because they’re new so you can be aggressive, but it’s tough to get it to the hole on the long putts.”

As for Soweto Country Club, which is a new stop on the Big Easy IGT Challenge Tour, Van Der Bergh said it was an excellent addition.

“It’s a very good course. There’s some nice bunkering. The greens are slow but they’re firm, so they’re good,” he said.

Meanwhile Allister de Kock strengthened his position at the top of the Transformation Order of Merit.

The Gary Player Class of 2019 member rallied after an opening 78 with a 67 that shot him to joint 15th on one-over 145. With a lead of just under R 2,000 over second-placed Dwayne Basson, the Uitenhage could cement the number one spot with a solid final round performance.