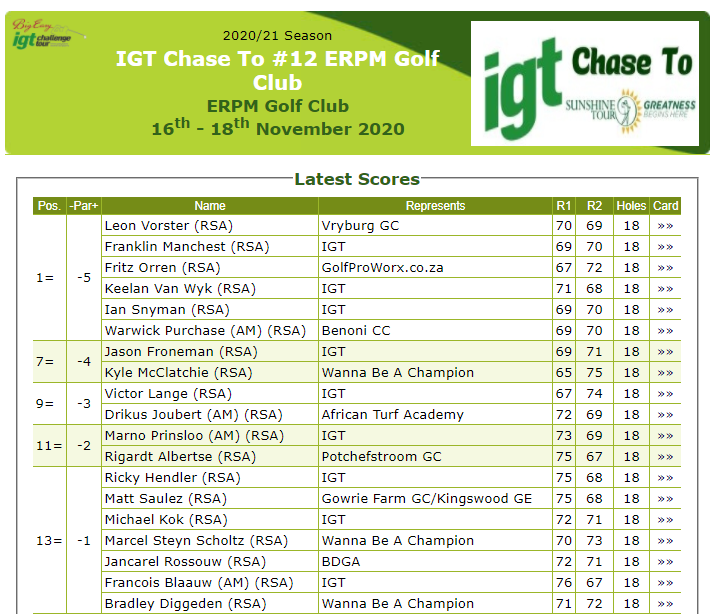 BOKSBURG, November 17 – Keelan Van Wyk capitalised on some solid ball-striking to piece together a bogey-free four-under 68 and get himself in contention ahead of the final round of the IGT Tour Chase To #12 at ERPM Golf Club on Tuesday.

Sneaking in with a perfect 68 in what would turn out to be a tricky moving day in Boksburg, Van Wyk made amends to a somewhat shaky one-under-par 71 opening round and is now in a six-way share of the lead at five-under-par for the week.

“Thanks to my ball-striking I was able to give myself decent chances and make use of them,” Van Wyk said. “The conditions were a lot tougher today but I hit the ball really well today and made some good putts. There was a lot of swirling wind out there, particularly on the back nine. I was able to judge the wind very well though and I think that also counted in my favour.”

Van Wyk made a solitary birdie he made on the par-five second hole, accompanied by the eight pars he made on that front stretch, in what proved to be a great job avoiding the big numbers early on in the round.

“It was the way I hit the ball,” he said, “it played a big role in keeping the bogeys off the card. Even when I would make a mistake, I was able to recover, so it was a good two days for me.”

He went on to make birdies on the 11th, 15th and 17th to sign for a 68. He ties the lead with Leon Vorster, Franklin Manchest who is still beaming confidence following his breakthrough victory at Modderfontein a fortnight, the on-form Fritz Orren, Ian Snyman and amateur Warwick Purchase to make up the six-man tie at the summit.

“My fellow competitors and I are good enough to shoot a low number on any given day,” he said of the possibilities that tomorrow might bring. “but I think the guy who stays patient and sticks to his game plan is going to win it.”

After a round-two three-over-par 75, overnight leader Kyle McClatchie surrendered his lead but remains a shot off the pace, along with Jason Froneman who backed up his round one score of three-under 69 with a 71 on Tuesday. A shot further and along with amateur Drikus Joubert, lies Victor Lange at three-under and within two strokes of the lead.