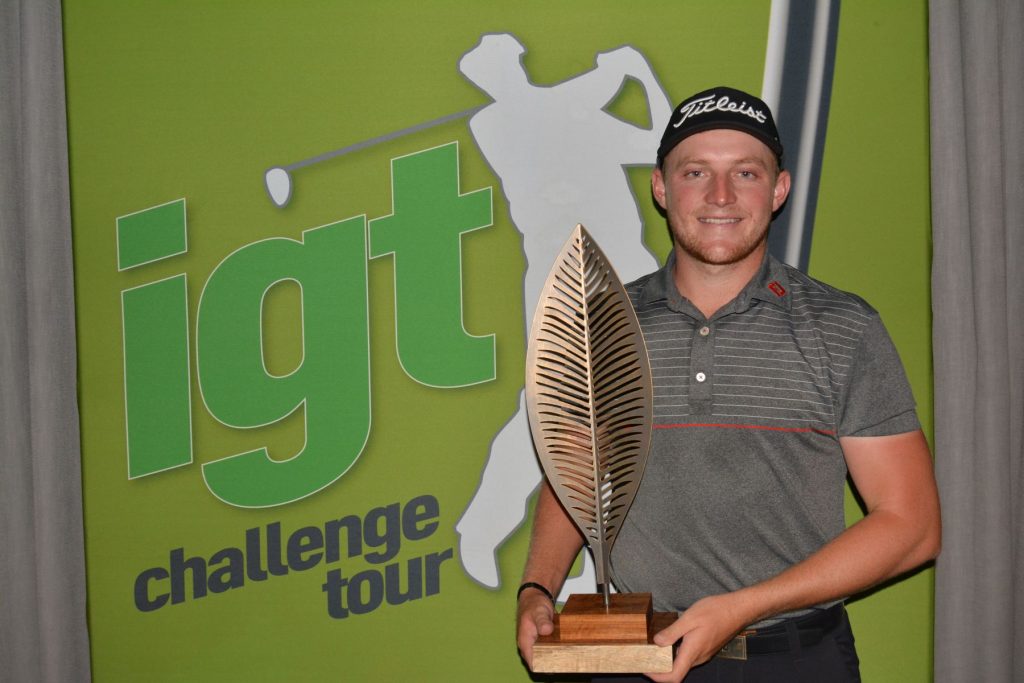 CENTURION, 16 January 2019 – Pretoria’s Albert Venter put on an ice-cool display on windy day at Centurion Country Club to claim his a four-stroke victory in the IGT Challenge Tour’s first Race to Q-School on Wednesday.

The Silver Lakes professional was composure personified as he carded seven birdies en route to a final round 66 to finish at the top of the pack with a 15-under-par 201 total – despite the early pressure applied by a plethora of contenders.

Chief among them was joint overnight leader Wynand Dingle and Michiel Bothma.

Dingle racked up 11 straight pars before his first birdie at 12. The Pecanwood golfer dropped 16, but a birdie finish for a 71 earned him a share of second alongside the four-time Sunshine Tour winner and IGT Challenge Tour ambassador, who signed for 70.

Carlsson set the course alight with five birdies on the front nine. The Bryanston rookie added two more coming home to claim the low round honour and fourth on his own on 10-under with a 65.

Viljoen, De Smidt and Sargent finished a further shot back after respective rounds of 69, 70 and 75.

The day, however, belonged to Venter.

Having entered the day one off the pace, he overhauled Dingle and joint overnight leader Luke Brown for the lead within the first six holes.

“We had an extremely windy start and conditions were made even tougher with some really tricky pin positions,” Venter said. “You had to hit the fairways of you wanted to play attacking golf.

“I hit a lot of fairways, but even when I missed, I had put myself in a good position so I could still walk away with pars. I started great with a good drive down the fairway. I hit a 2-iron from 230 metres out front edge and made the up-and-down for a birdie start.

“I pulled my tee-shot left at five and was under the trees. The flag was back right. I punched out short of the bunker, but couldn’t make the up-and-down for par. Erased the bogey with a good birdie at six, after I hit a wedge from the left rough to six foot.

“At seven, I hit my drive just past the bunkers. I hit a solid 3-wood and came up 25 feet short of the pin and two-putted for birdie. I hit wedge from 144 metres at the eighth to 15 foot and boxed that to go three-under.”

A well-struck lob-wedge from the fairway at 10 to five feet earned Venter his fifth birdie of the round.

“I think I was two clear at this stage, but I pulled four shots clear with back-to-back birdies at 13 and 14,” he said. “Then I could take the foot off the gas pedal a bit.

“I hit gap-wedge to three feet at 13 and I hit a great trap-shot from 77 metres at 14 and holed the 10-footer for birdie to go 15-under for the tournament. Michiel and Wynand chased hard on the front nine, so it was nice to play the last four holes with such a big cushion.”

Venter won the Alps Tour Qualifying School and earned his card for 2017. He held on to his playing privileges with a successful campaign in Europe last year, but it came at a cost.

“Spending so much time abroad meant I didn’t play the full Big Easy IGT Challenge Tour, but shortly after I got back home, I won at Reading Country Club and that breakthrough helped me to finish in the top 30 finish in the Road to Sunshine Tour, which qualified me for the Final Stage of the Sunshine Tour Qualifying School in March,” Venter said.

“I’m heading back to the Alps Tour next month and I’ll come back in early March for the Final Stage. The first event on the Alps Tour is in Egypt, which will be great experience for me. I’m really pleased to get my second win under the belt and so early in the season.

“It’s great to start the season on a positive note and I’m taking it as a good omen. The Race to Q-School heads to Silver Lakes next week; who knows, maybe I can make it two-in-a-row at my home course.”