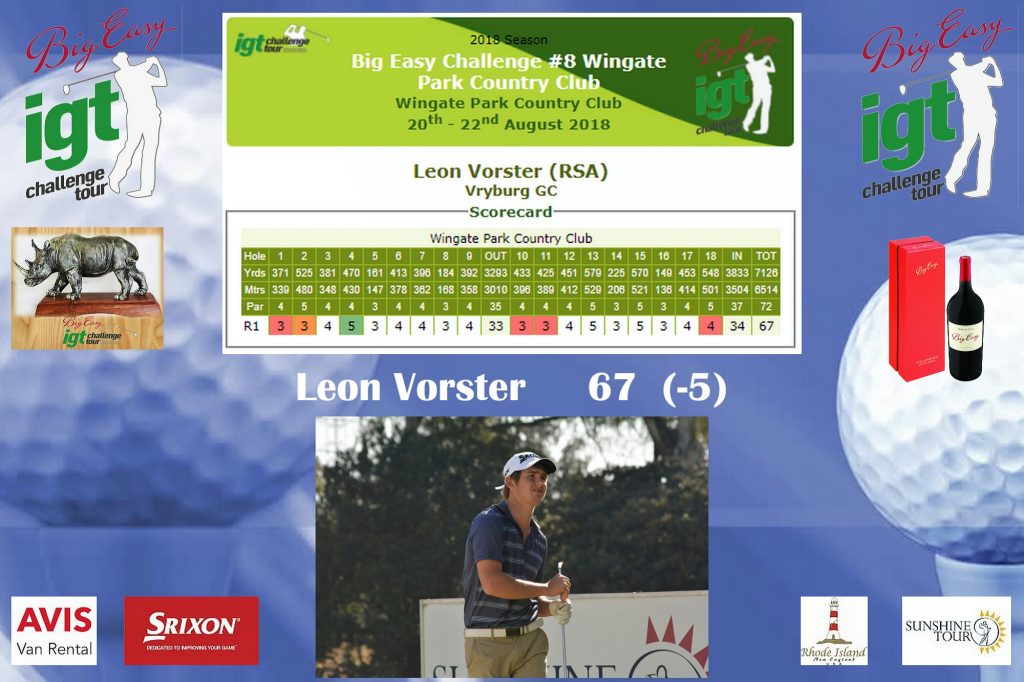 PRETORIA, 20 August 2018 – Vryburg rookie Leon Vorster and local professional Francois Coetzee finished at the top of a congested leaderboard on the opening day of the eighth Big Easy IGT Challenge Tour event at Wingate Park Country Club on Monday.
Vorster took advantage of an early tee-time and gentle conditions to set the early clubhouse target at five-under. Wingate Park’s Coetzee made a fast start in the afternoon with four birdies on his opening loop and added another brace of birdies on the back nine for a 67 to join the rookie in pole position.
The pair holds a one shot advantage over IGT Challenge Tour winners Ruan Korb and Hendrikus Stoop
Four players finished at three under, another seven three shots off the pace and Matt Bright, a two-time winner this season and currently second on the Road to Sunshine Tour 2019, bookended his round with birdies to lurk menacingly at one-under.
Vorster joined the pro ranks in March and enjoyed some top 10 finishes in April. A grip change in May set a run of missed cuts in the motion and he was over the moon to be back in contention
“It was fun today,” said the 21-year-old North West golfer, who reached the turn in three-under, courtesy of a birdie-birdie start and another at the par five 18th.
“The greens are so good. They run fast and roll nicely and I’m finding great pace on them. I hit my first tee shot into the trees right, pitched on the right of the green and holed a 25-footer for birdie. I hit a gap-wedge from the middle of the fairway at the second to six foot and made the putt.”
Vorster picked up three more shots on the way in, but his otherwise blemish-free card was tarnished with a bogey at the fourth.
“I drove it into the trees and I was up against a root. I chipped out and got on the green, but I two-putted for bogey,” he said.
“It’s a great feeling to put a decent score together again. I made a grip change in May and my coach John Dickson warned me that it would take time to get used to the change. You know it’s going to click, but all that waiting and working wears on you. I started seeing some positive results in July.
“My putting stats were also ugly, so as soon as I felt comfortable with the grip, I had some putting lessons with John and I’ve seen a huge improvement. My putting stroke definitely had a lot to do with today’s score.”
Coetzee, who has been campaigning on the Sunshine Tour for seven years, birdied the second and made three birdies on the bounce from the fifth to turn four-under. He dropped a shot at 12, but rallied with birdies at 13 and 15 for a share of the lead.
“I hit 9-iron to 10 foot at the fifth, followed a good 2-iron off the tee at six with a gap-wedge to six foot and punched out from the trees at seven to the back of the green and holed a 12-footer for birdie,” said the 28-year-old Pretoria golfer.
“I hit a poor tee shot at 12 and my only other bad shot was on 18, where my tee shot leaked into the trees and I missed a birdie chance on the par five.”
Coetzee took a few months off to run a wet cast cement company, but he returned to competitive golf in the Big Easy IGT Challenge at Bushwillow in earlier this month.
“I work to keep myself on the road, so I need to be selective with my Sunshine Tour schedule, but that’s way it’s great to have the Big Easy and the IGT Challenge Tours. I get to keep competitive close to home and prepare for my next Sunshine Tour start,” he said.