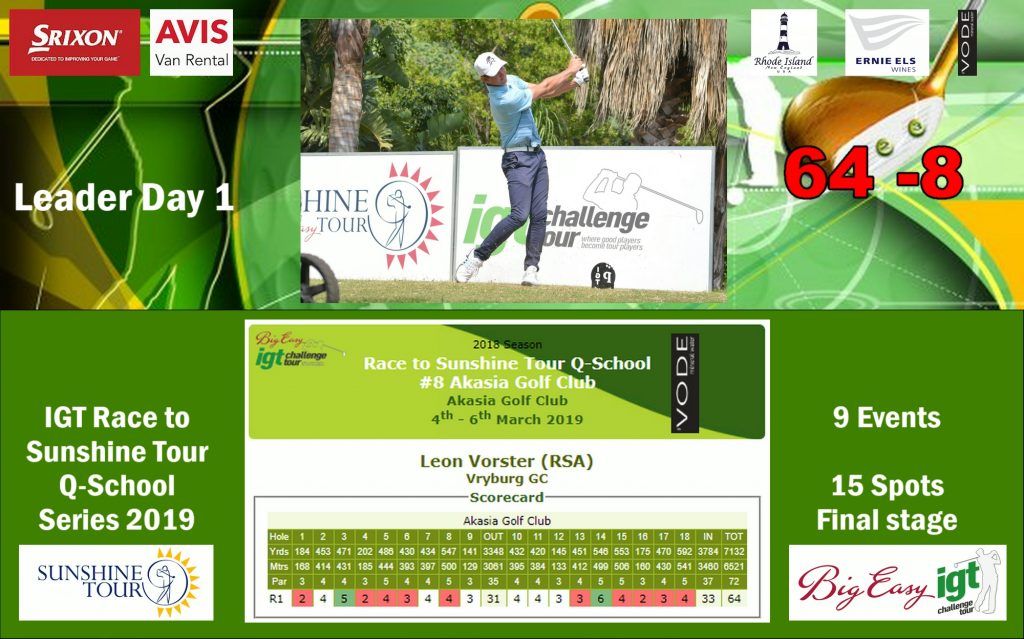 Vorster gets in on action at Race to Q-School Akasia

Vorster gets in on action at Race to Q-School Akasia

The Vryburg golfer set the tone for a low scoring day with an eight-under-par 64 to lay down the clubhouse target at Akasia Golf Club on Monday.

Korb from Pretoria went five under in the last five holes with an eagle at the par five 14th and a trio of birdies to make it two at the top of the leaderboard.

Strydom eagled 14 and 18 to finish two shots adrift in a tie for third alongside amateur Ivan Mare, who racked up five birdies on the homeward loop for his 66.

Albert Venter, Richard Joubert and amateur Paul Rodriques are a further stroke back in joint fifth.

Strydom – a four-time winner on the country’s premier golf development circuit – will have a stab at gaining playing privileges for the 2019 / 2020 season after booking his spot for Final Stage courtesy of his First Stage qualifier win at Eagle Canyon.

For players like Vorster, however, this week and the ultimate event in the Race to Q-School Series at Reading Country Club is the last chance saloon.

“Only the top 15 players in the Race to Sunshine Tour Q-School after Reading will qualify for the Final Stage,” said the 22-year-old Vorster.

“I started this week 24th in the rankings, so I really needed to make a hot start. I haven’t had a good summer at all. It’s been a series of missed cuts, but thankfully the work I’ve done with Eugene Schwartz at The Els Club Copperleaf is starting to pay off.

“I was over-swinging badly, so we worked on shortening my swing to gain more accuracy and consistency and I started feeling it click into place last week. I also played to the strengths of my game today. My short-game and putting has been strong, so instead of hitting driver, I opted for 4-iron off the tee to leave myself 100 metre shots into the greens. It got me the results.”

Vorster got off to a birdie start and overturned a bogey at the third hole with a run of three birdies.

“I went with the driver at the third, finished in the rough and paid the price, so after that, I just stuck to the game plan,” he said. “I hit 4-iron at four to eight foot, went with 4-iron twice at the par five and had an easy up-and-down for birdie and at six, I hit 4-iron, 7-iron to 10 feet and boxed the birdie putt.”

Vorster followed a birdie at 13 with a bogey at 14, but rallied straightaway with four birdies for his 64.

“I hit my tee shot at the par five right into the water, but bounced back with a birdie at the next par five to get back to five-under,” he said.

“At 16, I boxed a four-footer and at 17, I hit a gap-wedge to 15 foot and drained the putt. At 18, I hit my first decent driver of the day down the middle. I hit a 7-iron in but it finished right of the green, but I made another good up-and-down for a birdie finish.

“I am starting to trust the swing changes and it is definitely showing in my scores. I just need to keep pushing in the second round to keep myself in contention. A top three finish this week will get me a whole lot closer to the top 15 with one event to go.”