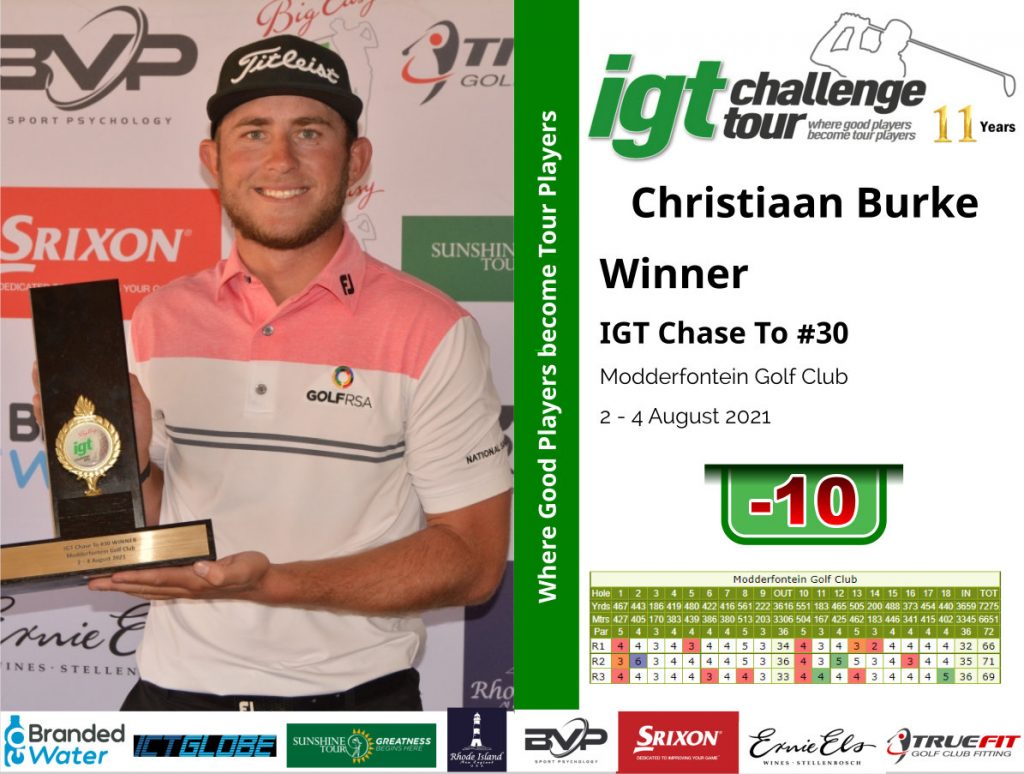 Christiaan Burke took his second title in as many weeks on the Big Easy IGT Challenge Tour when he won the Chase to the Sunshine Tour #30 at Modderfontein Golf Club on Wednesday by four strokes with a 54-hole total of 10-under-par.

Burke, who led from start to finish, closed with a three-under-par 69 with five birdies and two bogeys. That gave him the equal best round of the day as fellow-amateur Casey Jarvis also carded a 69 to finish on six-under for the tournament. Jarvis shared second with yet another amateur, Kyle de Beer, who was a third player with a 69.

“I played pretty well today,” said Burke. “I looked at a scoreboard early on the front nine, and I saw that someone was on five-under. So I knew I had to keep up the pressure. And when I made my birdies on six and nine, I moved to 10-under and seven clear at that stage, with none to play. I felt pretty safe at that stage.”

That someone was yet another amateur, Slade Pickering, who made eagle on the first, and birdies on three and six. But bogeys on eight and nine saw his charge stall, and he made two birdies, a bogey and a double on the homeward nine to finish the third round in one-under 71, and on two-under for the tournament in a share of fourth with Kyle McClatchie.

For Burke, it’s a question of riding the wave. “All the work I’ve put in over the past year is paying off,” he said. “I feel confident every time I tee it up, and I feel as if I can score well all the time. My bogeys today came from a bit of bad luck on the 11th, where I got a hard bounce with my tee shot off the back of the green, and then I three-putted the last, which was really just a little careless.”

Burke won’t be in action in next week’s Big Easy IGT Challenge Tour event. “I’m playing in the Southern Cape Open,” he said, “but I hope that I can keep up my good form there.”