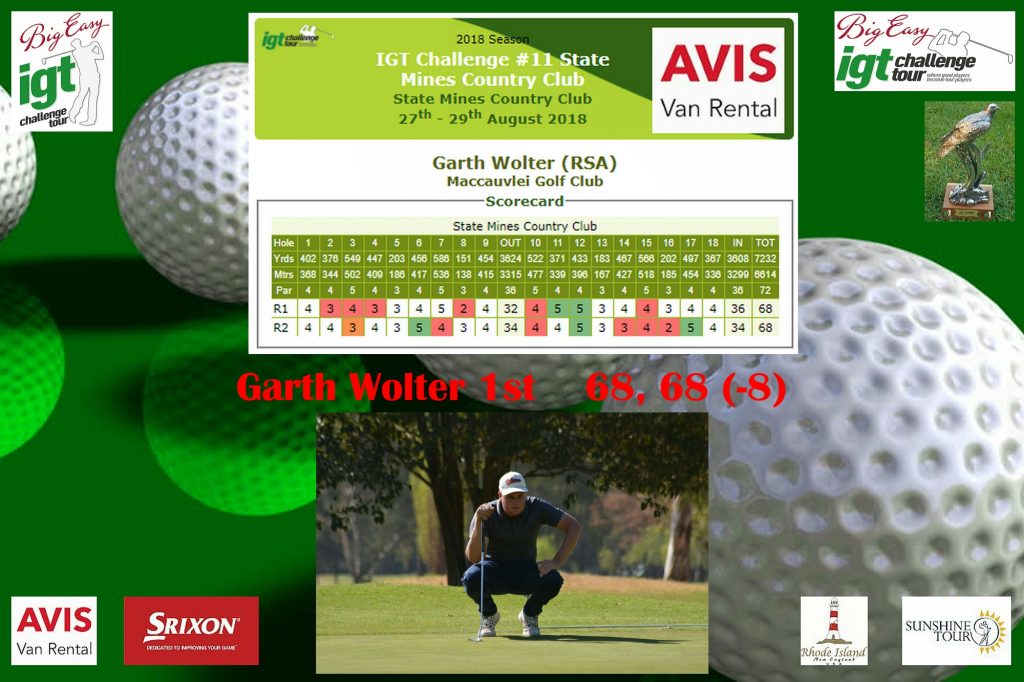 BRAKPAN, 28 August 2018 – Vereeniging restaurateur Garth Wolter will sleep on a five-shot lead after taking command of the IGT Challenge #11 in Tuesday’s second round at State Mines Country Club in Brakpan.

Unlike the cold and windy conditions on day one, the weather was warm and sunny, but once again, only 12 players in the 71-strong field managed to post red numbers.

Wolter carded four-under 68 to move to eight-under, finishing well clear of Peetie van der Merwe, John McClean and overnight leader Michael Pfeifer in joint second.
“I was surprised that the scores weren’t lower, because the weather was so much better,” said the 25-year-old Maccauvlei golfer. “That said, the course set-up was brutal. The pins were tucked or set on slopes and made it tough to score.”

Wolter fired a trio of birdies to start the opening round and a further gain at the eighth propelled him to the top of the leaderboard. He lost pole position to German-born South African Pfeifer, but overcame the one-shot overnight deficit early on day two with an eagle at the par five third.

“I wanted to take a Tiger line at the par five, but my tee shot stayed out left,” said Wolter. “I had a clean shot to the green, though, and landed an 8-iron from 163 metres out two feet from the pin and holed the putt.”

Wolter bogeyed six, but was back to six under with a birdie at the par five seventh and led the field through the turn. He traded a birdie at 10 for a bogey at 12 and three birdies on the bounce from the 14th hole saw him open up a yawning gap on the field.

“I was on for two at 15, but I landed front right and the pin was back right, so I lagged the first putt close and made the second for four. At the short hole, I holed a 10-footer for birdie.”

Wolter enjoys the challenges of running the Urban Eatery Restaurant, which he co-owns with his father and sister in his hometown, but the desire to play the pro circuit still burns strong.

“I practice every available moment at Maccauvlei and work on my game constantly, but it’s tough to take time away from the restaurant,” he said.

“I haven’t played much this season, so I am really pleased with my performance over the first two rounds. I’m striking the ball really well and giving myself chances. It would be really nice to close out a win on Wednesday, just to boost the confidence.

“The IGT Challenge Tour is great for the youngsters to bridge the gap between the amateur and pro ranks, but it’s also a lifeline for guys like me. We have tournaments all year long to stay competitive. I really want to give Qualifying School one more bash. Maybe now that I’m a little older, a little wiser and more mature, my time has come.”
Pretoria rookie Van der Merwe returned a 70, Ulsterman McClean posted an even-par 72 and Pfeifer from Fancourt made it a three-way tie at three-under after carding 73.

Bryce Myburgh and Patrick Thompson a further shot adrift after signing for a pair of 71’s, while Sunshine Ladies Tour campaigner Lejan Lewthwaite was the only female survivor after the 36-hole fell at 11-over 155.

The Benoni golfer will start the final round in joint 12th on two-over after successive rounds of 73.