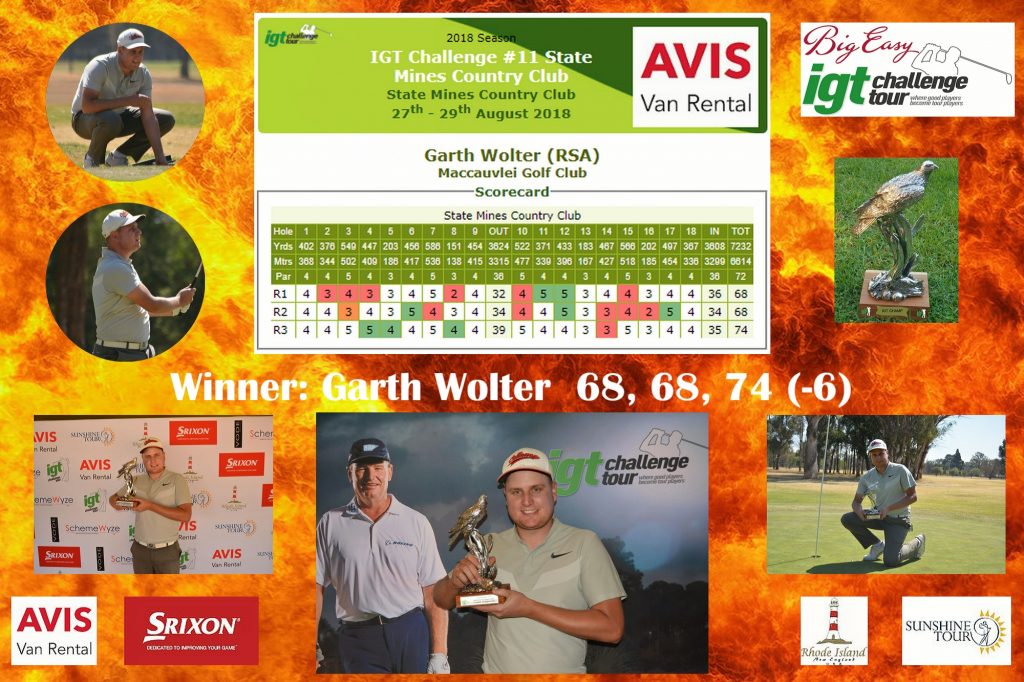 BRAKPAN, 29 August 2018 – Garth Wolter tapped in for par to beat pacesetter Bryce Myburgh in extra time to celebrate his maiden success on the IGT Challenge Tour at State Mines Country Club on Wednesday.

Myburgh fired a five-under-par 67 to set the clubhouse target at six-under 138, but Wolter forced the 11th event into a sudden-death play-off when he closed with a two-over 74.

Wolter had started the final round with a five shot cushion over three players and seven shots clear of Myburgh from Umhlali. However, it turned into ding-dong battle between Wolter and Myburgh when the overnight leader’s cautious game plan cost him the lead on the front nine.

“Instead of sticking to the same game plan, I started nursing my shots and my distance control went out the window,” said 25-year-old Wolter. “I failed to up-and-down for par on three holes and suddenly I was sharing the lead with Bryce.”

Wolter turned five-under after bogeys four, five and eight with Myburgh, playing a couple of groups ahead, on the same number after three birdies on the bounce at five, six and seven and another gain at nine.

“It was a good thing, really, because it forced me to play more aggressively on the back and I scrambled really well to save par,” Wolter said. “Then Bryce pulled two shots clear with birdies at 14 and 16. I scrambled unbelievably well and I didn’t drop any more shots.

“I hit a great 7-iron down the middle at 14 and had 95 metres left to the green. I hit gap-wedge in and two-putted to square with Bryce. When he bogeyed 18, I knew I still had a chance to win or get into a play-off.

“I made some good pars at 15, 16 and 17 and I had a chance to win it at 18, but I was putting from the fringe and the putt ran past the hole. Bryce played unbelievably well, so I was only too happy to have a chance to take it to a play-off.”

The pair needed two extra trips down 18 for a result.

“The first time around we both made pars,” he explained. “The second time, Bryce blocked it right into the trees and I hit my tee shot straight down the middle. Bryce had to chip out and he was on the green for three. I hit my approach to 10 foot. I lagged the first putt close and tapped in for par after he missed his par putt.”

Wolter, who co-owns Urban Eatery in Vereeniging with his father and sister, was hard pushed to stop smiling.

“I’m so stoked about this win. The restaurant keeps us really busy and it’s difficult to make the time to come out and play,” said Wolter.

“I hoped to make the most of my start this week and I have. I handled the pressure well, although the first nine holes were a bit of a battle, but I scrambled well and did all the things I needed to do to keep myself in it. To win in a play-off was great and I’m looking forward to building on this win.”

Ulsterman John McClean finished third on his own on four-under with a final round 71, while Patrick Thompson carded 70 to seal fourth on three-under. Former IGT Challenge Tour winner Gary Daoust from Belgium and Shaun van Tonder posted respective rounds of 69 and 72 to round out the top five on two-under.